Wadjet Eye Games seem to be on a roll lately for Linux support. First we saw upgrades and new ports of The Blackwell Bundle, then Gemini Rue and now we have Unavowed. A good time to be a point and click adventure game fan.

"A demon possessed you one year ago. Since that day, you unwillingly tore a trail of bloodshed through New York City. Your salvation comes in the form of the Unavowed – an ancient society dedicated to stopping evil.

You are free, but your world is in tatters. You have no home, no friends, and are wanted by the police. Your old life is gone, but perhaps you can start a new one. Join the ranks of the Unavowed, and fight against the oncoming darkness." 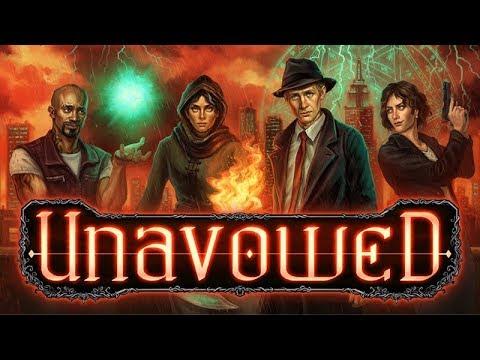 With the latest update, it brings with it a game engine upgrade (Adventure Game Studio) and these improvements:

Available on Humble Store and Steam. GOG does not yet have the Linux version.

Eike 28 Jan
View PC info
Dreams are coming true.
I've heard this considered to be among the best point and click adventures.
Let's find out why.

View PC info
Oh nice! I've played most of the Wadjet titles, but not this one!
2 Likes, Who?

View PC info
Fingers crossed they're going to do all of them. Resonance has a Linux version on GOG, I think, but not on Steam because GOG packaged it themselves back in the day.
2 Likes, Who?

Quoting: CatKillerFingers crossed they're going to do all of them.

Seems they're going for it!

Quoting: EikeSeems they're going for it!

Well they got Steam sales for these ones from me even though I'd bought the GOG versions before, so they'll get at least one more Steam sale of the others that they do as well.
3 Likes, Who?

View PC info
Great to see them giving their back catalogue some Linux love. I bought this in addition to Blackwell Epiphany just before the weekend, thanks to the new ports, and I enjoyed playing through Epiphany a lot. I realize this one isn't really my cup of tea, after playing about an hour of it, since I don't care much for choices in adventure games, but I'm enjoying it so far, nevertheless.
0 Likes
While you're here, please consider supporting GamingOnLinux on: