AYANEO, maker of some pretty popular gaming handhelds, announced that their own Linux operating system for their devices will be released this year. While we've seen others looking to the public release of SteamOS 3 that powers the Steam Deck (like GPD and OneXPlayer), AYANEO seem to want to "do a Valve" and have that extra level of control directly.

AYASpace will be upgrade and improved and also AYASpace 2 is under development which will be released in 2023 !
What's more,  new feature "Community" will be added to AYASpace APP. 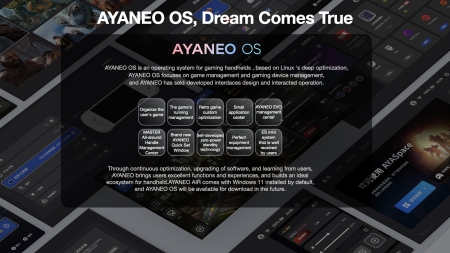 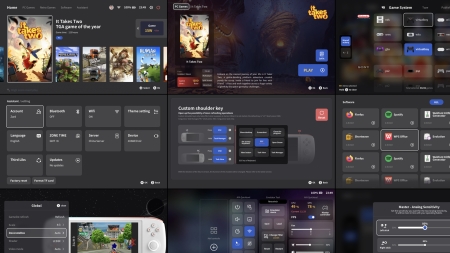 When they previously talked about the Linux-based AYANEO OS, they said "AYANEO team loves games and game consoles as well. In the process of creating the best Windows handheld in the world, they found that the existing operating system in the new form of PC handheld still has many poor experiences, and even some problems that we can't be solved. In order to allow everyone to enjoy the game and the handheld hardware better, AYANEO has launched the AYANEO OS, which is based on the Linux system and developed exclusively." and they mentioned clearly they would be using Proton too.

They recently finished their IndieGoGo crowdfunding campaign for the AYANEO 2 and the GEEK model, both of which come with an AMD Ryzen 6800U. They had 2,680 people give over their monies to help fund them, with their IndieGoGo now switching to in-demand which is basically like another way to pre-order the devices. So while successful for AYANEO at $3,157,147 currently in total, it's an absolutely tiny fraction of what the Steam Deck has sold which was over a 1 million units back in October last year (that was even before launching in some Asian regions).

If I hear any more, I'll let you know.

2023 is clearly the year of Linux gaming handhelds huh?

About the author - Liam Dawe
I am the owner of GamingOnLinux. After discovering Linux back in the days of Mandrake in 2003, I constantly came back to check on the progress of Linux until Ubuntu appeared on the scene and it helped me to really love it. You can reach me easily by emailing GamingOnLinux directly and find me on Mastodon.
See more from me
Some you may have missed, popular articles from the last month:
46 comments
Page: 1/5»
mr-victory 18 Jan
View PC info
Hard to trust without any development/testing ISOs or source code.
4 Likes, Who?

I probably won't the steam deck is great. If they want to win me over they will have to make some pretty compelling arguments.
2 Likes, Who?

Well, things are moving in the right direction.
Btw, I was wondering, if Linux is not already the most successful gaming platform. If you count Android, it might already be. Does anybody have numbers on the market share for gaming devices?
2 Likes, Who?

View PC info
I wonder if they'll also have a desktop session out of the box, like the Steam Deck
0 Likes

Klaas 18 Jan
I wonder if they have enough resources to make something useful. They might be better off with a SteamOS fork.

The SteamOS version used by the Steam Deck still has some rough edges and they've worked on it quite a long time and Valve has a lot of money to throw at problems.
1 Likes, Who?
Purple Library Guy 18 Jan

Somehow it feels like nailing Al Capone for tax evasion. Which is to say, seems kind of weird and sideways, but if it works . . .
7 Likes, Who?

Quoting: Purple Library GuySomehow it feels like nailing Al Capone for tax evasion. Which is to say, seems kind of weird and sideways, but if it works . . .

I'm gonna show my age a bit now, but back in the days of the 8-bit home-micros in the UK, it was always gaming that helped to drive the adoption of home-computers and related technologies. I don't see why it should be any different here.

8 Likes, Who?
1/5»
While you're here, please consider supporting GamingOnLinux on: