Deep Rock Galactic from Ghost Ship Games has now left Early Access and thankfully it continues working very well on Linux when played with the Proton compatibility layer for Steam Play. More info on Steam Play can be found here.

Deep Rock Galactic is a 1-4 player co-op FPS featuring badass space Dwarves, 100% destructible environments, procedurally-generated caves, and endless hordes of alien monsters. The underground caves are dark and full of terrors. You will need to bring your own lights if you want to illuminate these pitch-black caverns.

There's a few reasons why we've chosen to cover this particular title, with the first and most obvious that it's now actually released and continuing to work very well. Additionally, Valve made a bit of a splash with it getting a big storefront banner so there's going to be a lot of eyes on it. Most importantly though? It's now one of Steam's most highly rated games. DRG is doing so well in fact, it's currently 98 on the Steam Top 250 list.

Here's a quick look with Steam Play Proton 5.0-7 - sadly no one joined me for this particular video: 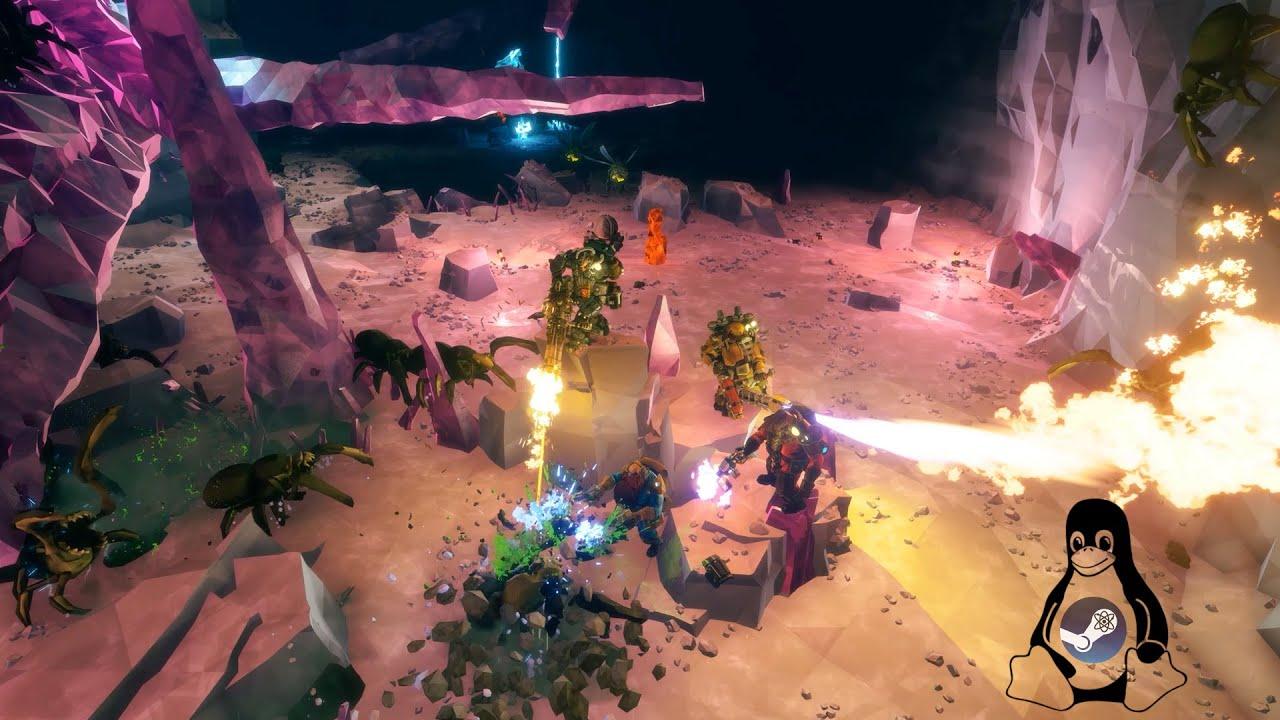 Video is using the MangoHud to show FPS, frame timings and more.

To be clear about it, there's two things that do not currently work which need to be mentioned. Firstly the small character videos don't work (not important, you can try Proton-5.8-GE-1-MF) but more importantly you seem to be unable to voice chat. You can hear others but they cannot hear you. Thankfully there's text-chat and you have a scanner item to highlight anything you want in the world from ore to enemies.

I've had a huge amount of fun with it personally with tens of hours in it and it does get extremely intense.

You can buy Deep Rock Galactic from Humble Store and Steam.

We do often include affiliate links to earn us some pennies. We are currently affiliated with GOG and Humble Store. See more here.
About the author - Liam Dawe
I am the owner of GamingOnLinux. After discovering Linux back in the days of Mandrake in 2003, I constantly came back to check on the progress of Linux until Ubuntu appeared on the scene and it helped me to really love it. You can reach me easily by emailing GamingOnLinux directly.
See more from me
Some you may have missed, popular articles from the last month:
The comments on this article are closed.
12 comments
Page: 1/2»
Enkhiel 14 May, 2020

View PC info
too bad it is first person so I cannot play it with my wife :(
looks interesting though
0 Likes

View PC info
Might be worth noting that Proton GE >= 5.8-GE-1-MF should allow the character videos to play as stated in the release notes.

View PC info
Pity about the inability to voice chat. This was something that was broken in the Linux port of Payday 2 and it was endlessly frustrating. I myself can't type messages nearly fast enough to critically communicate in FPS co-op shooters like this where team coordination can be mission critical.

Does anyone know why voice chat doesn't work in DRG? Perhaps it's something that could be changed in the official Steamplay build of Proton or maybe brought to the attention of the devs. If the fix were minor enough, who knows, they might consider it.
0 Likes

Quoting: Enkhieltoo bad it is first person so I cannot play it with my wife :(
looks interesting though

View PC info
Can it be enjoyed single player, or is it like Vermintide 2 where you can for a bit, but should really do MP. This looks so much like my jam.

Quoting: randylCan it be enjoyed single player, or is it like Vermintide 2 where you can for a bit, but should really do MP. This looks so much like my jam.

Single player is perfectly possible, especially with the little drone you're given when alone. However, after a couple of hours it might become a bit lonely.
1 Likes, Who?

einherjar 14 May, 2020
Not working voice is kinda showstopper in a coop game. Looks interesting though, but IMHO 30€ is too much (especially with reduced function aka voice chat).
0 Likes

View PC info
It's so strange the voice chat bug never got fixed, or even figured out exactly what was going wrong. BIG head scratcher that one.

PS. I tested this game since early days and it DID work at one stage back in early proton days.

Quoting: einherjarNot working voice is kinda showstopper in a coop game. Looks interesting though, but IMHO 30€ is too much (especially with reduced function aka voice chat).

Deep Rock is a lot more fun than I anticipated. I was worried that the randomly generated levels would feel too similar and boring. But they are really cool! The variety of difficulty is an excellent mechanic as well. You can start the night on easy to get warmed up and then crank it up once you feel cocky. My friends and I haven't played it for maybe 2 weeks now, but I put in 40 hours before we wanted to try something else. Worth it to me! I also joined a Twitch streamer once, which was fun.