The open source Heroic Games Launcher is a game launcher that currently works with the Epic Games Store, providing Linux users with an easy way to manage it and play games.

Since Epic themselves don't provide official Linux support, it's down to the community and nowadays it's the only place for new people on PC to get the likes of Rocket League. With the Heroic Games Launcher that combines with the Wine compatibility layer and the Legendary client, things get that little bit easier. 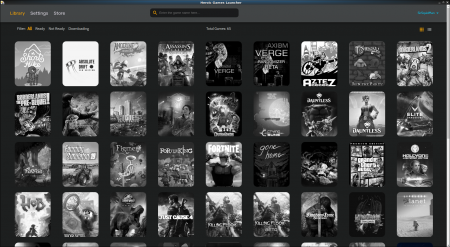 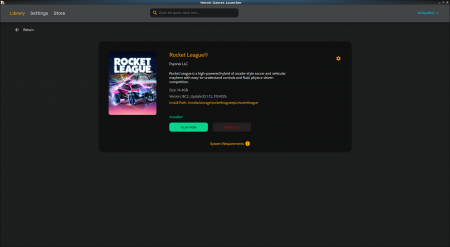 It's been a few months since we last wrote about it here and a few new releases have appeared during that time. Quite a lot is new including:

Even if you're not a fan of Epic Games, there's no denying how much they've grown as a store both in terms of users and the amount of games available. Having an easier way to go through them on Linux is pretty essential to the health of the platform overall so it's good the Heroic Games Launcher exists. Epic continue giving out free games constantly too, lots of them work okay with Wine and for people moving over to Linux it's another solution to not lose access to favourites.

Download Heroic from GitHub, it's free and open source.

Nugrud 22 Mar, 2021
How much is it better compared to running Epic Games Store app through Lutris?
0 Likes

View PC info
The thing that bothers me the most about this GUI is that uninstalled games get greyscale images. Taking away the most important recognition factor.
0 Likes

Quoting: EhvisThe thing that bothers me the most about this GUI is that uninstalled games get greyscale images. Taking away the most important recognition factor.

I suppose it does that to mimic the original client, on Epic they are greyed out too.
2 Likes, Who?

Since you no longer have to use Epics piece of crap Windows only application, Heroic is infinitely better.
2 Likes, Who?

Bumadar 22 Mar, 2021
I guess creating that epic account and simply adding the free game every Thursday is about to pay off

Quoting: BumadarI guess creating that epic account and simply adding the free game every Thursday is about to pay off

I kinda stopped that long ago.
I give AF about that EPIC store. I shortly bought Surviving Mars on Steam even though I own it on EPIC.

I just do not want them to get something from me, at may it be playtime they can show off.
When they start supporting Linux, I`ll be back.

But do not get me wrong, it is awesome that people create software in their spare time to let Linuxers use EPIC.
It is just not attractive to me, as I prefere to spend money on Steam instead of playing free on EPIC. Of course it is also more convenient for me to just click play.
6 Likes, Who?

does epic already have Achievements? i dont think they work with heroic
just try it. it has an appimag, which makes it very easy do use
0 Likes
paparoxo360 22 Mar, 2021
I don't know if it's happening with you guys, but my download speed on Heroic is really slow.
0 Likes

Nugrud 23 Mar, 2021
After trying it I think it would be better if this 'legendary' was a runner in Lutris, and Epic Games Store was handled like other websites in that app.
1 Likes, Who?

does epic already have Achievements? i dont think they work with heroic
just try it. it has an appimag, which makes it very easy do use

No. Epic Games Store and games on it doesn't have achievement support.

So why do you expect Heroic to have achievements?