Bottles is the very promising free and open source application to help you directly manage installing things with Wine, the compatibility layer to run Windows apps and games on Linux. It's going through constant change right now, with lots of big new features being added in.

Ready for growth, there's also a new dedicated section on their website for finding installers. You will also find their own bundled version of Wine named "Caffe", has been upgraded to Wine 7.2. Plus, plenty of the usual bug fixes sprinkled right in. 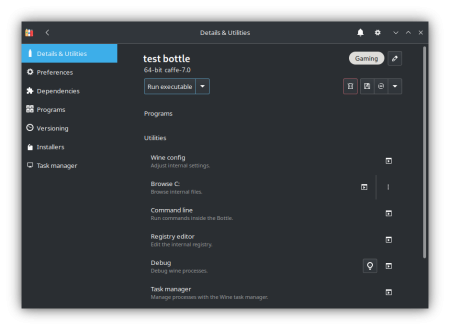 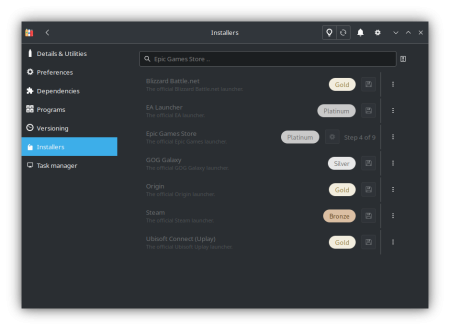 View PC info
I still wish winepak (expired https, but accepting that is better than http anyway) had caught on

It seems like the lack of an automated infrastructure made the project not sustainable.

View PC info
Bottles is starting to catch my eye. It seems a bit cleaner and straightforward compared to Lutris dealing with manual configs/installs and now that they implemented their own installers... well, I'm definitely going to start playing around with it at least. If they keep adding features at this rate, it should be a great choice in no time.
0 Likes
Purple Library Guy 16 Feb
But if you don't update your Wine version, it'll be old Wine in new Bottles.
6 Likes, Who?
mirkobrombin 16 Feb
View PC info

Ya, not. You can use wine from your system but Bottles will still install its (constantly updated) own and will always default to that.

Edit: Oh wait, maybe that was a joke :S

Ya, not. You can use wine from your system but Bottles will still install its (constantly updated) own and will always default to that.

Edit: Oh wait, maybe that was a joke :S

According to history books, oldest Wine is 28 years old. I wonder if you can put it into Bottles anymore...
1 Likes, Who?
Purple Library Guy 16 Feb

Quoting: mirkobrombinEdit: Oh wait, maybe that was a joke :S

Comandante Ñoñardo 16 Feb
View PC info
I wonder if, someday, We can have The PC GAME PASS Xbox Client running on Linux...
That would be the maximum PC gaming compatibility achievement.
0 Likes

Quoting: Comandante ÑoñardoI wonder if, someday, We can have The PC GAME PASS Xbox Client running on Linux...
That would be the maximum PC gaming compatibility achievement.

View PC info
Much better than Lutris! Less faffing and easier to use.
Even though I have always made my own Wine Prefixes for everything and is just as easy.
0 Likes
While you're here, please consider supporting GamingOnLinux on: