Continued from Part 20: The Antideluvian World

While their foray into interactive storybooks did fail to impress, it did help remind me of BlackHoleSun Software, one of the earliest Indie developers to create games with Linux in mind. They were a cross-platform studio whose first game Krilo was boasted to be the first "commercial game that contained versions for Linux, Windows, MacOS, and BeOS on one CD-ROM", with at least some of their games having been developed from Linux and then ported to other systems.

Their most well known game Bunnies would be released as shareware in 2001, with the bunnies-1.06-x86linux.sh installer providing a demo version you could later update through the use of a retail key. Since BlackHoleSun Software is now out of business I can no longer register my copy of the game, which is a shame as Bunnies while braindead is still kind of fun. The demo limits me to playing only one map called "The Castle", with eleven further maps being teased.

Bunnies also included a level editor for registered players which helped spawn an active mapping scene, with a collection of fan maps once being hosted on the BlackHoleSun Software website. Up to six rabbits can compete at any given time, and can be either computer or human controlled. The objective is simple; just move your rabbit to hop on top of other bunnies to make a rain of gibs fly out across the screen, or not if the "no gore" option has been set.

In fact, an entirely gore free version of the game was also made available, by using the bunnies-nogore-1.06-x86linux.sh script instead of the default installer. Bunnies allowed the player to connect to online servers for networked multiplayer, as well as for up to four players to play locally from a single computer. Gameplay modifiers include being able to toggle a low gravity mode, jetpacks, or even reversing the orientation of any given map.

Technically the game ran alright for me, but did produce a few segmentation faults and some graphical corruptions when displaying text fields. BlackHoleSun Software would go on to work on one more game, the 3D team based vehicular combat title Aftermath, before they folded up shop in the mid 2000s. At this point though the future of Bunnies or any of the other games from BlackHoleSun Software appears dead in the water. 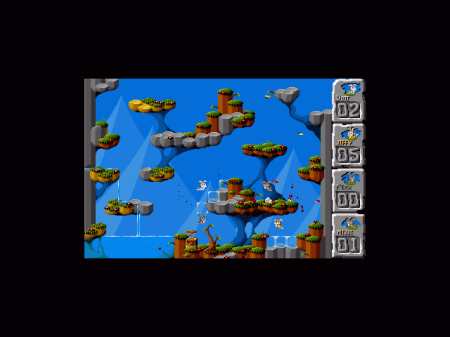 Thankfully, the story does not have to end there. Bunnies itself is derivative of the earlier game Jump 'n Bump released for MS-DOS in 1998 by developer Brainchild Design, with its source code made available a year later in 1999. This allowed the game to be ported over to Linux using the SimpleDirect Media Layer, with installation on Red Hat Linux 7.3 being made trivial by use of the jumpnbump-1.50-1.0.rh7.rf.i386.rpm package from freshrpms.

Jump 'n Bump allows for up to four players to play over the network or from a local hotseat. The game also sported an active mapping scene in its day, with a number of additional maps once being available from the Brainchild Design website. Most of these maps can still be accessed through the Wayback Machine on the Internet Archive, although the need for someone to maintain a modern curated archive of these appears to be apparent.

If I am honest I would say the overall visual style and presentation of Jump 'n Bump is superior to Bunnies, with cleaner pixel art and a cute interactive menu screen. The gameplay is pretty much identical, with the same frantic hopping about and the same rain of gibs upon contact. Even most of the modifiers found in Bunnies can be unlocked inside Jump 'n Bump through the use of cheat codes, along with a few tweaks unique to Jump 'n Bump itself.

You can even activate AI controls by holding down the Alt key followed by the number of the player you wish to bring to life, allowing Jump 'n Bump to be tackled as a single player game. With its assets available work on Jump 'n Bump has continued apace, with a fork of the game supporting SDL2 still seeing active development. There is also a modern remake of the game based on the Godot Engine, and even a version made that can be ran from within a web browser.

Jump 'n Bump is far from the only time the free software community has created an enduring game, with its close to twenty five years of existence seeming paltry in comparison to some of the classics. One of those classics wears many faces, but there is one face in particular that has remained etched in my memory for years, even if I never did get a good handle on the game's actual mechanics. It is time to change that.

Carrying on in Part 22: Happy Hacking

Hamish Paul Wilson is a free software developer, game critic, amateur writer, and farm labourer living in rural Alberta, Canada. He is an advocate of both DRM free Linux gaming and the free software movement alongside his other causes, and more information on him can be found at his icculus.org homepage where he lists everything he is currently involved in: http://icculus.org/~hamish
See more from me
Some you may have missed, popular articles from the last month:
9 comments

View PC info
The shareware version of Bunnies can be downloaded from here:
https://files.holarse-linuxgaming.de/native/Spiele/Bunnies/

And the LibreGameWiki article for Jump n' Bump can be read here:
https://libregamewiki.org/Jump n Bump
5 Likes, Who?

16 Jan
I've only played the SDL1 version of Jump 'n Bump. I'm glad that there is an updated version.
0 Likes

View PC info
I can't remember if I played original Jump n Bump or the open source port, either way it was a long time ago and just hearing the name was a core memory unlock.
0 Likes

Funnily enough, I've heard of it, but I constantly mix it up with "Bump 'n' Jump" (also known as Burnin' Rubber or Buggy Popper), which is a 1980s arcade racing game by Data East where you have to destroy other cars.

They share the same core mechanic (you have to jump on top of opponents in order to destroy them), even though the perspective and player-avatars are entirely different, so I wonder if that was an intentional reference?

This reminds me of how fun and chaotic the online multiplayer was in Jazz Jackrabbit 2 back in the day!

That allowed for user-created maps, too, but if memory serves they would automatically download to all players once you were connected to opponents, so it could be a bit problematic, as people would sometimes misuse that to give themselves an advantage...

Lightkey 17 Jan
View PC info
One of the rarer ones I have on CD.

Not CD-ROM though, looks like a CD-R with printed upside in jewel case. No backside inlay, only front, also pixel-y with inkjet printer.
I bought it from Tux Games, who presumably wrote the serial number on the inlay with a ballpoint pen, since it also has my name on it.
Just in case anyone finds this up for sale and wonders whether it's legit.
1 Likes, Who?

Funnily enough, I've heard of it, but I constantly mix it up with "Bump 'n' Jump" (also known as Burnin' Rubber or Buggy Popper), which is a 1980s arcade racing game by Data East where you have to destroy other cars.

Quoting: LightkeyOne of the rarer ones I have on CD.

Would love to see some pictures of your full collection, but it is good to know that I am not missing much by not having the Bunnies disc to show.

I probably would not have given Bunnies an article on the basis of just the shareware without Jump 'n Bump and the fact BlackHoleSun Software came up organically with the last one.
0 Likes
While you're here, please consider supporting GamingOnLinux on: