Today, Day of Infamy [Steam, Humble Store] has a free update with new maps, one of them directly inspired by the new war film Dunkirk and a new foliage system. 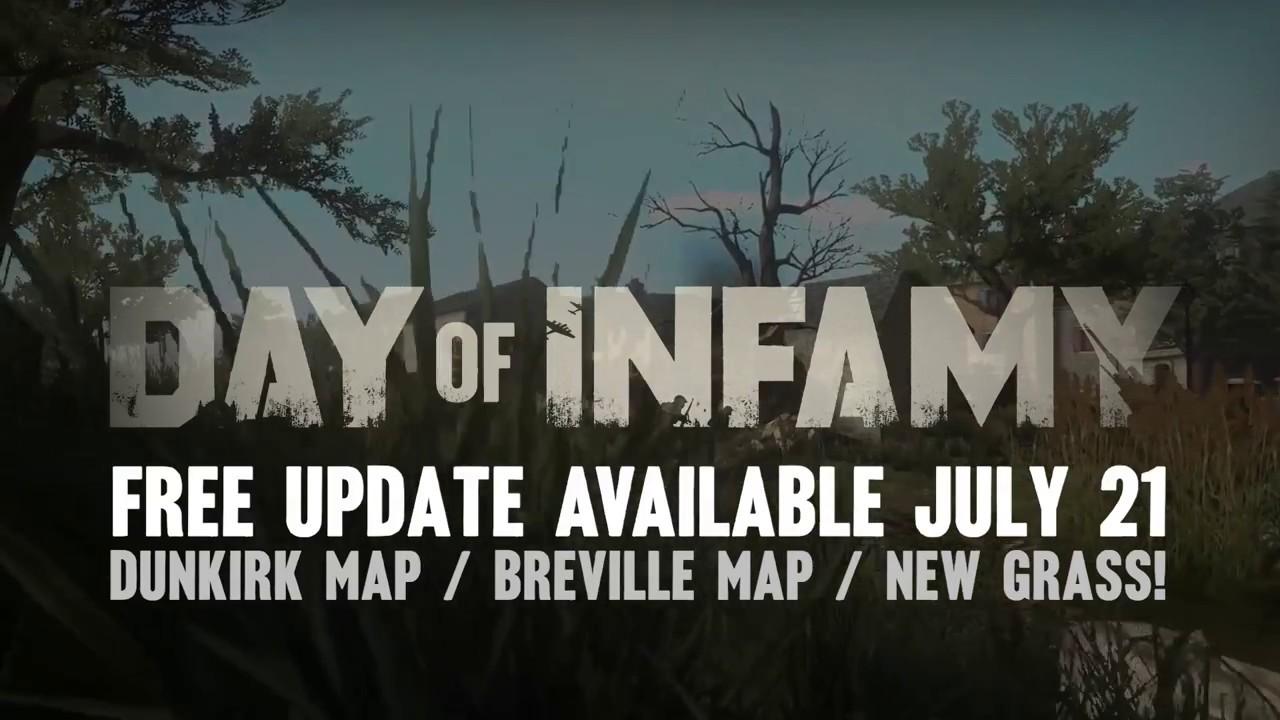 The creative director, Andrew Spearin, said this about it:


QuoteOur Dunkirk map offers a unique gameplay perspective by inverting the flow of battle so it ends on the beach instead of starting there.

They will also be doing a livestream on their official Twitch channel today to celebrate. It will start at 11:30 EST/15:30 UTC, according to the current title on their Twitch page.

I tested out the new Dunkirk map and it's really quite good. Fun to play as both sides, with lots of different locations as you progress through it. The crashed plans on the beach is a nice touch, being able to hide inside them to pop out is fun.

It does still have an annoying bug on Linux where it shows you as not in-game while playing, which is strange. Hilariously, they still haven't fixed soldiers having dead white eyes on Linux. Apart from that, it seems all good.

Having another FPS like this on Linux is fantastic, it's somewhere we're still lacking. Article taken from GamingOnLinux.com.
Tags: Action, FPS, Steam
3 Likes, Who?
We do often include affiliate links to earn us some pennies. We are currently affiliated with GOG and Humble Store. See more here.
About the author - Liam Dawe

View PC info
i already wrote a bug-request for the issue, not shown in game (hard for me, because friends cant find me ingame)
i hoped it will be fixed after that update. :(
i also dont find any servers now, since the update.
edit: after reinstall it works. :D

Quoting: GuestWow... But still the loading time bug under linux is not fixed. Devs, we cant enjoy this under linux if the map takes 2 min to load and be responsive...this bug has been reportwd everywhere even with a ticket 2 months ago...espectacular support.

Damn, was hoping that had been sorted :( That and the onlune/playing showing up correctly.
0 Likes

View PC info
I'm 52 year-old American, and my generation was infatuated with WWII---the war of our parents and grandparents, so doubtless I had been exposed to the story of Dunkirk before on one documentary or another, but this was the first time I really learned about Dunkirk.

I recently watched [a documentary on Netflix about Winston Churchill called Winston Churchill: Walking with Destiny](https://www.netflix.com/search?q=chruchil&jbv=70170418&jbp=1&jbr=0). In it I learned about the evacuation of Dunkirk, and left me in a state of profound humility and awe. The selflessness and determination of the British volunteers was an act of the purest, highest humanity, of Sacredness and Heroism nonpareil.

I am no one to begrudge anyone anything, but I cannot bring myself to play a game about such an moment...something of which entertainment, I believe, is simply unworthy.
0 Likes

Traversy 24 Jul, 2017
View PC info
It takes me 3-4 minutes to load with Shaders and everything set to low. With this, when I load a co-op game I pretty much miss the entire first round. On Insurgency, lowering shader quality helps me load the game faster, not so with Day of Infamy.
0 Likes
While you're here, please consider supporting GamingOnLinux on: