By flesk - 5 November 2015 at 12:47 am UTC | Views: 5,828
PONCHO is an open-world puzzle platformer where you control a robot who is able to flip between parallax layers. The game was released on the Humble Store and Steam this week, and I've taken a look at it. 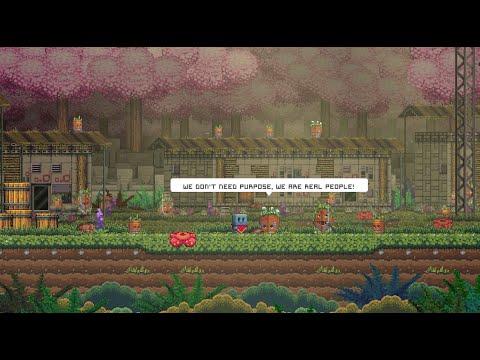 YouTube videos require cookies, you must accept their cookies to view. View cookie preferences.
Accept Cookies & Show   Direct Link
Developer Delve Interactive ran a Kickstarter campaign last year to fund development of the game. When the campaign was unsuccessful and that option fell through, TRI publisher Rising Star Games stepped in and helped realize the project.

As mentioned, PONCHO is an open-world platformer, and as you open up different worlds, you're free to switch between them from a level select screen, where you can also track what you've collected and what remains to be found. Some paths will initially be closed, but as you acquire new skills and find keys, new paths are opened up for you to explore. Each world also have lots of gems to be found, and there's a shady dealer who will let you trade them for keys, if you can locate him. There are other collectibles as well, but they won't be available from the start.

You can hop between three dimensional layers at will, provided there's nothing blocking you on the layer you want to go to. Levels are designed so that you have to be a bit clever about how you move around in them, and you often have to switch a bit back and forth between layers, and often mid-jump. It's not always possible to see whether there's a platform to land on in a different layer, which means you will sometimes have to make a leap of faith to figure out where to go. If you die though, you re-spawn on the platform you jumped from, and it happens quickly, so I didn't find it to be an annoyance. Walking on platforms in the distance isn't a problem either, since if there's an obstacle in front, it will become semi-transparent, so that you can see where you walk. There are also platforms which jump between dimensions, and using these can be a bit of a challenge. Some of them just go back and forth on their own accord, while others only move when you jump to a different layer.

The game hasn't been without technical issues though, as I've been struggling a bit with a screen resolution issue. There's no windowed mode, and when I first started the game it was set to a resolution that didn't fit my screen. What's worse is that a couple of times when I've started the game, it has launched in very strange resolutions, like 44388x1366 and 20x1366. This might be a result of me messing with a config file to force windowed mode, but it seems odd to me that it should have this side effect. I didn't experience any issues in my last session with the game though, so it's possible that the issue was addressed in the latest patch to the game. What's still a bit wonky is that sometimes when you die, your player character will re-spawn inside an obstacle, killing him off a couple of more times before he finally re-spawns in a safe location. It's not a huge issue for me, but a bit of an annoyance nevertheless.

Apart from these issues though, I'm having a blast with the game, and so far it's living up to my expectations and more. As I've mentioned before, I'm a huge fan of open-world puzzlers, and there really aren't many of these kinds of games. If this sounds interesting, you can buy PONCHO from the Humble Store and Steam. Buying from Humble will give you a Steam key.

About the game (from Steam)
A robot, a poncho and a journey of discovery! Make your way through this wonderful world of pixelated parallax platforming to solve the ultimate puzzle: who is Poncho?

The world is ruined; mankind is gone and all that remains are robots. But for Poncho, the adventure is just beginning! Explore an open world full of colourful characters, leaping between parallax layers to overcome obstacles and solve puzzles. Can you make it to the Red Tower, meet your Maker and ultimately save humanity?

Sure, but it looks also unplayable without some kind of 3D glasses :)
Just kidding... But the video wasn't very clear on this point, and I've had a hard time discriminating layers.

Are they using SDL2? or some other graphics toolkit?
0 Likes
While you're here, please consider supporting GamingOnLinux on: