Legends of Eisenwald being ported to Linux by Codeweavers, will use Wine 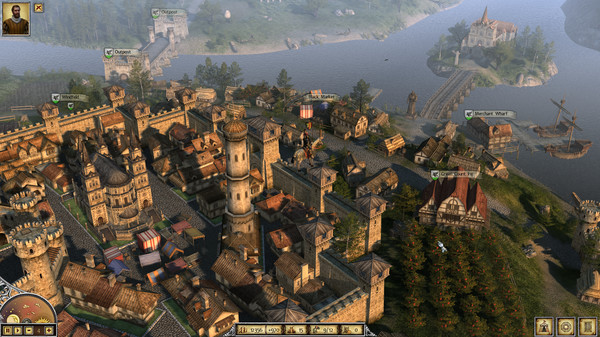 Legends of Eisenwald an adventure game with tactical battles, RPG and strategy elements is finally coming to Linux thanks to help from Codeweavers and Wine.

From the Steam forum:

We started development in 2010. Back then cross platform wasn't much of a concern. Had we raised enough on Kickstarter for a port in 2012 (we had a stretch goal), we would have switched then to OpenGL. But funds were tight and we unfortunately didn't. Funds are tight again :)


QuoteFor future games we will be still using our engine. And it's DirectX. So unsure what will happen to ports again...

So don't expect their future games to get a true native port either. Still, if Codeweavers manage a good port it will be okay. If used well, Wine can be an excellent resource for us, but some recent Wine ports have been pretty poor for me personally.

Back in November of last year they stated that sales had simply not been good enough.

About the game
Legends of Eisenwald is an adventure game with tactical battles, RPG and strategy elements. Take the lead of a small feudal army and try to defend your right to survive in this ruthless medieval world.

The mysterious lands of old Germany are waiting for you - it's a land where the superstitions of the time have come to life. This isn’t a fantasy game. There are no elves or dragons here. There are only people - and their passions, sins and fears that often take a tangible form. Which path will you choose? Live according to your conscience? Or live by power and might? Or will you live by justice? And what is your justice, really? Article taken from GamingOnLinux.com.
Tags: Action, Adventure, RPG, Strategy, Upcoming, Wine
0 Likes
We do often include affiliate links to earn us some pennies. We are currently affiliated with GOG, Humble Store and Paradox Interactive. See more here.
About the author - Liam Dawe

Imants 30 May, 2016
View PC info
Yeh OpenGL is very hard to learn because it is real garbage pile. It is fool of junk and dated methods which developers should not ever use. And there are very many dated tutorials witch do not show how you need to use modern OpenGL. I myself now prefer OpenGL ES 2.0 and greater specification. Because they throw out all garbage what where piling up in OpenGL and mad more seance in it. So I do not blame them for not wanting to learn OpenGL from scratch because someone needs to make OpenGL 5 or something totally new library where all the garbage which was piling up all these years are thrown away and are left only those methods witch should be used in modern days.
0 Likes


I wonder what makes this game an adventure instead of a straight up tactical RPG though.

O.o ?
So its still not a concern. And wine ports for recent titles like this one (and their future games) are still not a good thing, too many of them can damage linux gaming

Seriously, you wonder what's going on in these developer heads at times. Either cross platform is an issue now or it isn't. If you want to be cross platform, you can't use an engine that can exclusively deploy to DirectX. It should be Captain Obvious approved information. *shakes head*
4 Likes, Who?

Quoting: edoSo its still not a concern. And wine ports for recent titles like this one (and their future games) are still not a good thing, too many of them can damage linux gaming

Developers using Wine is a completely different situation than end-users using Wine. First, it is fully supported and it is "batteries included", game runs out of the box. Second, developers can wrap the Windows game, but also compile the source code against Wine libraries. The latter allow applications to behave much more like real Linux applications that are aware of your Linux filesystem. Third, Wine is open source and Codeweavers doing the port allows them to tweak and performance tune Wine for this game.

If this is all done, Wine becomes much more a translation layer like Eon is than a Windows emulator (please don't start that discussion).
7 Likes, Who?

O.o ?
So its still not a concern. And wine ports for recent titles like this one (and their future games) are still not a good thing, too many of them can damage linux gaming

To be fair, it would require a major engine rewrite to go from DirectX to OpenGL.
0 Likes

Quoting: dmantioneDevelopers using Wine is a completely different situation than end-users using Wine. First, it is fully supported and it is "batteries included", game runs out of the box....

SketchStick 30 May, 2016
Wrappers are always going to add an extra layer of complexity and bugs, so these Codeweavers ports are the only ones I can really approve of. They at least contribute to Wine and can do some good by pushing those fixes where everyone can benefit from it.

Also as the years go by and compatibility of the shipped version starts to break down, we can always grab the latest Wine version and run it ourselves along with all the improvements that were made since then. By comparison eON has none of those benefits and all of the drawbacks of being a wrapper port...

1. No game newer than four years old shall be ported with WINE.

2. Games still receiving updates and content shall not be ported with WINE.

3. WINE is not to be used to ship big budget, commercial releases.

4. Games of graphical fidelity which would set a modern GPU ablaze shall not be ported with WINE.


Okay I just pulled that out of my ass but I'm pretty sure this release violates at least one of those commandments.
0 Likes
1/2»
While you're here, please consider supporting GamingOnLinux on: