SHENZHEN I/O is the new simulator/puzzle game by Zachtronics, the creators of other excellent games like Spacechem, Infinifactory and TIS-100. After being on Early Access for some time, it's now available on Steam since November, 17th. But most importantly, even when only two weeks have passed since the official release, the game already has 'overwhelmingly positive' reviews by Steam users, just like its predecessors; out of a total 785 reviews so far, only 14 are negative against 771 positives, something truly remarkable. 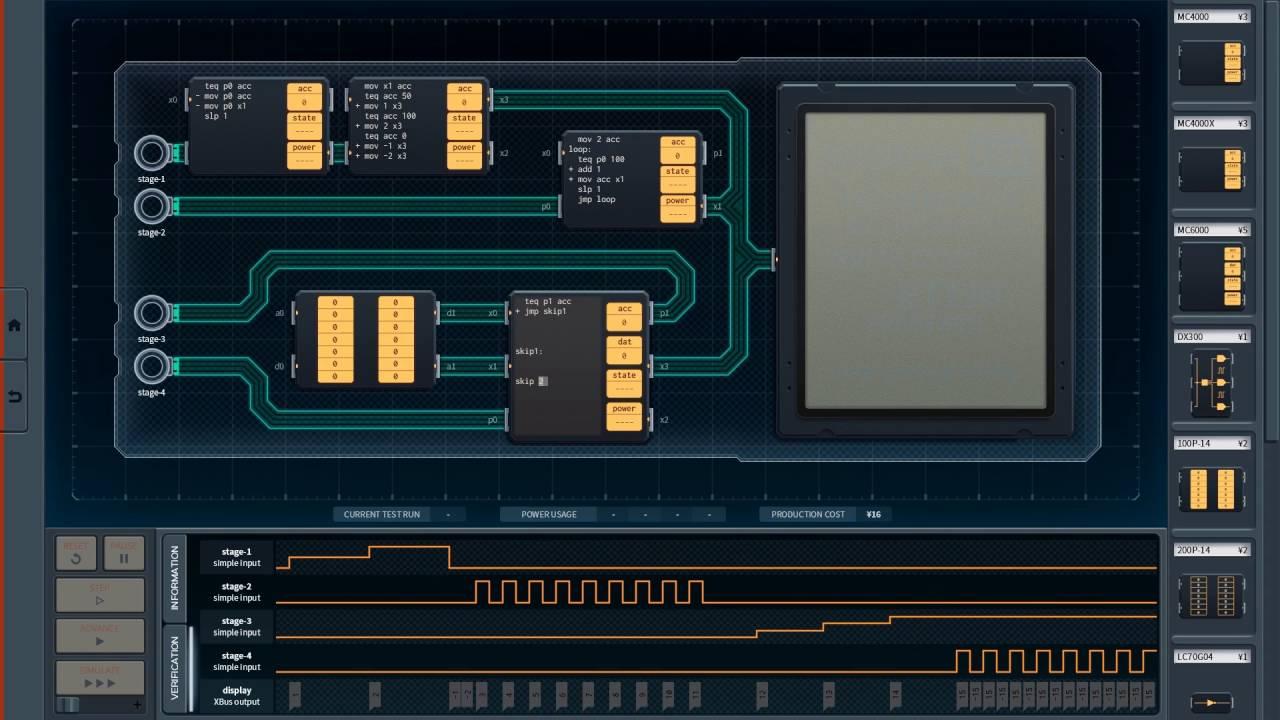 - Seriously, if you aren't a programmer, these games are impossible to learn. I'm talking about almost every game released by Zachtronics; they're extremely cryptic. I recently bought on Humble Bundle and tried their other game, TIS-100, and I couldn't even program the most basic line; and I'm glad that I saved some paper by not printing the attached manual, because I read it and I didn't understand one simple sentence. SHENZHEN I/O has a more complex manual, so I don't even need to play it to have the certainty that I won't get anything from it.

It isn't about lack of motivation or interest since I love to solve puzzles, and the premise of learning a bit about programming really attracted me. Also I don't think it's because I lack patience either, or the necessary skills to learn the commands, because with a bit of research I was able to overcome some technical problems by using the Linux Terminal.

This isn't a rant against Zachtronics, but I have to say it's truly a shame. I really wanted to play their games, but that isn't possible because of the insanely steep learning curve, it's like quantum physics if you don't have the base qualifications. I don't seem to be the only one with this problem, given that the Most Helpful negative review (with 750 people out of 1005 finding it useful) addresses the same concerns. Maybe the inclusion of a tutorial for complete novices, or extremely simplistic puzzles, would've made things easier?

Anyway, good luck and enjoy the game for me. I might try my luck with Infinifactory sometime. Obviously feel free to contribute with comments if you have more knowledge than me regarding these kind of games...

About the game (Official)
-Build circuits using a variety of components from different manufacturers, like microcontrollers, memory, logic gates, and LCD screens.
-Write code in a compact and powerful assembly language where every instruction can be conditionally executed.
-Read the included manual, which includes over 30 pages of original datasheets, reference guides, and technical diagrams.
-Get to know the colorful cast of characters at your new employer, 深圳龙腾科技有限公司 (Shenzhen Longteng Electronics Co., Ltd.), located in the electronics capital of the world.
-Get creative! Design and test your own games and devices in the sandbox.
-Engineering is hard! Take a break and play a brand-new twist on solitaire. Article taken from GamingOnLinux.com.
Tags: GOG, Indie Game, Itch.io, Puzzle, Simulation, Steam | Apps: SHENZHEN I/O
4 Likes, Who?
We do often include affiliate links to earn us some pennies. We are currently affiliated with GOG, Humble Store and Paradox Interactive. See more here.
About the author - Sunburst

My articles aim to be a small contribution in that sense, by giving these hidden gems some of the exposure they deserve.
[code][/code]
See more from me
Some you may have missed, popular articles from the last month:
The comments on this article are closed.
34 comments
Page: 1/4»

View PC info
I actually saw repeated requests sent to the developer with our @gamingonlinux Twitter account tagged asking the developer to send us a copy, they never replied thankfully, as I know this would go way over my head too!

Eike 6 December 2016 at 12:11 pm UTC
View PC info
I totally will buy and play this! ...after having (started and) finished Infinifactory.

I always wonder how hard such games are for non-programmers.
I think Human Ressource Machine should be possible, while TIS-100 is probably too hard (and abstract).
I enjoyed both.
3 Likes, Who?

View PC info
It starts exactly with that, "extremely simplistic puzzles". The language consists of very simple and handy instructions (conditionals, for instance, are implemented nicely with +/- prefixes) and the learning curve is quite gradual. Many people say that SHENZHEN I/O is the most accessible Zachtronics game ever and I agree with them. Played all the mentioned games before. So go try it and don't be afraid that much. Controllers don't bite!

PS: it also has a story and even characters, all well written. Something I haven't seen before in this kind of games.

View PC info
@SangreDeReptil: What exactly is the thing on your avatar?

View PC info
I can see TIS-100 having a learning curve, but Infinifactory is very different and very accessible. I prefer TIS-100 myself, though. The manual wasn't that hard to grok, but some understanding of basic programming concepts definitely helps. And the later levels really do test your brain as well as your patience.

Like Eike said, if you like puzzles, you'll probably enjoy Human Resource Machine. My wife does, and she's no programmer, or even a hard-core puzzle enthusiast. I haven't yet bought SHENZHEN I/O but I'm sure I'll love it when I finally do. Currently it occupies a comfortable spot in the top three on my Steam wishlist.
1 Likes, Who?

These games are too hard for programmers too. The developer thought it would be a good idea to not explain things decently and throw a difficulty wall at the face of players.

"Overwhelmingly positive" means nothing, and this is another proof.
0 Likes

stan"Overwhelmingly positive" means nothing, and this is another proof.

"Overwhelmingly positive" IMHO means that the game does very well on delivering what it promises. Thus, very positive reviews for a pixel art rogue-like means nothing to me, while the same for a programmer's game means it very probably will be fun for me - which turned out true for TIS-100 and Human Ressource Machine (and I am very optimistic for Shenzen I/O).
1 Likes, Who?

View PC info
I haven't played Infinifactory, but with TIS-100, I think it would be very difficult to make a good tutorial. There's a lot of concepts to cover. It might be possible, given that it's "only" Assembly-like programming, but it would be tough to do and still wouldn't help everyone. With Shenzen I/O, it looks like that would be an even more difficult task. I haven't played it yet, but it looks like there's a combination of Assembly-like programming as in TIS-100, plus circuit design and signal processing.

For the type of people they seem to be targeting most, the fake manuals are exactly what are needed.

I only just started TIS-100 and I'm liking it so far, but I already see it's a game that requires a lot of focus. I'd like to play Shenzen I/O, but will probably wait until I have time to digest that manual.

km3kI haven't played Infinifactory, but with TIS-100, I think it would be very difficult to make a good tutorial.

Did you play Human Ressource Machine? (You should!

)
It does a better job in slowly introducing what you need.
0 Likes

km3kI haven't played Infinifactory, but with TIS-100, I think it would be very difficult to make a good tutorial.

Did you play Human Ressource Machine? (You should!

)
It does a better job in slowly introducing what you need.

I did! (I was a tester for the Linux version too.