User Editorial: A different approach to calculating the popularity of Linux gaming on Steam

As has been previously pointed out there are a few flaws with the Steam statistics, such as that users of the Big Picture Mode do not get the survey at all. There are also likely a few flaws we don't know about. Still, we can safely assume that the Steam Hardware Survey isn't completely lying either: Linux usage might be off by a bit, but if it says below 1%, it is rather unlikely that the real numbers are for example above 2%. It is a statistic, and we have to treat it like a statistic, that gives us an indication of the Linux market share on Steam. An increase likely means a larger market share and a decrease a smaller market share.

A fair point that has been made, however, is that the amount of Steam users has been increasing over time. Therefore, it is reasonable to assume the number of Linux Steam users has increased as well. The question is: How did Steam grow?

A number that is often mentioned is that Steam had 125 million active users in February 2015. The problem with this number is that we don't have any more recent data, which makes it difficult to back claims that Linux game usage did increase. We really need data about Steam growth to say anything meaningful about the growth of Linux gaming on Steam.

This question was wandering around in my head for a while until I got an idea: Steam reports the peak concurrent users each day. This number would be a good an indication of the size of Steam, be it not for the fact that Steam only displays the number of the last day. The solution to this is the Wayback Machine. Using the Wayback Machine we can see archived copies of the Steam statistics page and therefore reconstruct the growth of Steam over the years. It also allows us to see the Steam Linux market share in past surveys. Luck is that the Wayback Machine archives the Steam statistics quite often so there is a lot of data available.

I have collected the data from March 2014 to April 2016, taking a sample around the 20th of each month, and used it to estimate the peak concurrent Linux users on Steam, by multiplying the peak concurrent users with the Linux share. Then you get these results: 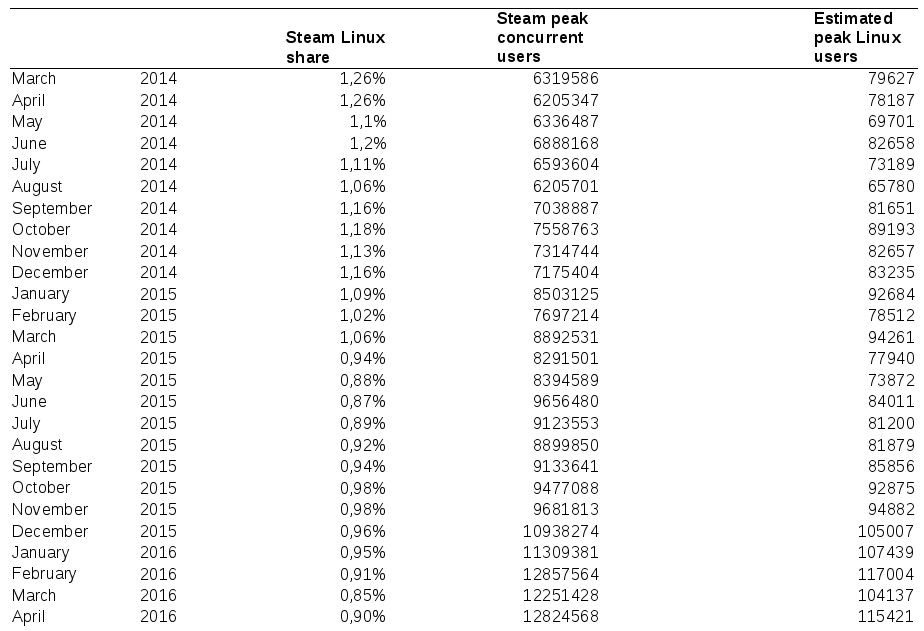 Making a graph, we have a nice visualization of the growth of Linux gaming on Steam:

What we can now see, and this information is probably revealed for the first time, is that Linux use did largely remain flat until halfway through 2015. But since then, Linux gaming is in a steady growth trend!
Now is this a good or a bad thing? The good news is that we are growing and the growth seems steady. This is probably why professional game porters like Virtual Programming and Feral Interactive are doing well: Their market is increasing. As these companies generally port games that have already proven themselves, they are likely looking at increasing turnover.

However, it is also clear we are growing slower than the rest of Steam, and this is a point of concern. Why? The faster Steam grows, the more games there will be available (and in fact the number of games released monthly on Steam has grown during the last years). Our money will be spread over more games and if we were already insignificant, we will be even more insignificant for game developers. Numbers below 1% *are* pretty bad, there is no way to deny this.

However, the real question is what this will mean for the future: Steam has grown a lot. If Steam had 125 million users in February 2015, it should now have 185 million users. Will Steam be able to maintain this growth? If Steam maintains the current growth, it would need 270 million users halfway next year. I think this is rather unlikely, because you can already fit the entire population of a lot of countries in 185 million people, let alone 270 million.
Such an increase would be slightly more than the entire population of a big country like Germany joining Steam. I can't believe that. There are a limited number of Windows gamers and therefore the amount of potential Steam Windows users are not unlimited. Also, quite important is that competition for Steam is increasing, for example from the Windows store, but also from other publishers who want their own stores.

Therefore I assume that Steam Windows growth will stall at some point during 2016. But Steam Linux growth? There is a still a lot of potential for people switching to Linux, there is a lot less competition, and especially important, with initiatives like Steam Machines, the number of potential Steam Linux users has increased a lot. Therefore, when Steam growth stalls, because we have some momentum, we will have a lot of opportunity to catch up.

Conclusion: The statistics say that we haven't seen the best of Linux gaming yet, not by far. Article taken from GamingOnLinux.com.
Tags: Editorial, Steam, Survey
1 Likes
Share

We do often include affiliate links to earn us some pennies. We are currently affiliated with GOG and Humble Store. See more here.
Some you may have missed, popular articles from the last month:
The comments on this article are closed.
29 comments
Page: 1/3»

View PC info
Yesterday I got the steam survey, second time in a year and a half.
1 Likes, Who?

View PC info
Wow, good job! Excenlent article. Unfortunately the data is not what we would like, but show that there was an increase in the number of Linux players.

Quoting: CandricSI've never seen a survey from Steam since I've been using it.

Me too. And already has a year and a half I'm using Steam on Linux.
1 Likes, Who?

View PC info
Looking at it from a business/enterprising point of view, you have one market which is expected to plateau and another which has plenty of room for growth. The latter isn't necessarily an unattractive target.
0 Likes

View PC info
The March drop is interesting. Not only did the peak users fall, but so did Linux share. I wonder if it was due to some bigger Windows-only releases in that month?
0 Likes

View PC info
Looking at the data it does seem that so far Linux didn't manage to bite much into the market share of other OSes. But it's also not surprising given that we're still lacking a lot of AAA titles and also suffer from many games performing worse in Linux than Windows. My guess is that there won't be too many converts from Windows until this is sorted, and that means we're likely stuck with the 1% share for a while. The good news is that the absolute growth we are seeing might convince more publishers to invest into porting their games, which (together with Vulkan) might help sorting the two obstacles over time.

PS: I never got the survey for Linux either. I am often getting it for Windows when I boot that to play MMOs (most of which don't even use Steam)...
0 Likes

Nyamiou 2 May, 2016
The number of Linux users doesn't matter, what matters is how much money they have in their pockets and how much money they are willing to spend. There is a lot of Steam users that only play one game, and often it's a free to play game, those guys don't matter much. The reasons we get so many games right now is that in terms of money spend on new games (especially outside of the blockbusters) we are more close to 5% than 1% and porting to Linux have become less expensive and easier.

dmantione 2 May, 2016
View PC info
SteamDB has the answers: The game with the most concurrent users, by far, on Steam is Dota 2, which is indeed free to play. So yes, free games can be a factor in ruïning statistics for which platform is most interresting. On the other hand, we have no reason to assume that Linux gamers do not play free games, in fact, we are used to free software.
0 Likes

I've got a question about it... I don't know how the peak of concurrent users number was taken, but if it was taken the same day the Steam statistics went out, we might have a problem here.

I'm pretty sure that if we display the curves of the peaks of concurrent users overtime, we would not see a straight line, but a bumpy one, depending on the day in the week. Meaning that if the statistics came out on a Sunday, the 1% of it would be quite different than during some day in the middle of the week.

So if it's not the case, it might be better to do an average of the peaks around the day where the statistics came out.
0 Likes
1/3»
While you're here, please consider supporting GamingOnLinux on: