Worms W.M.D will be getting cross-platform multiplayer, beta starts on Friday

Good news, Worms W.M.D [Steam, Official Site] is to gain cross-platform multiplayer and the developers have announced an open beta for owners of the game will start on Friday. 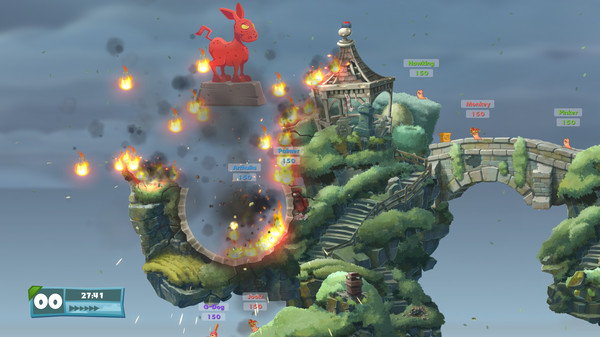 The developers said a while ago they were planning this for an update, so it's fantastic to see them actually deliver on it. A shame it couldn't be released with it.

The developers sure are looking forward to it:

The beta will start on Friday 25th of November at 10AM UTC and end on Tuesday 29th at 10AM UTC. You only need to opt-in to the "beta" branch on Friday to be able to test.

They ask that any bugs are reported to their official bug tracker. See this Steam forum post for the full info.

Looks like it could be a good contender to show off in our livestream on Friday, if anyone fancies joining in?

Have many of you played it, if so let us know what you think in the comments.

Article taken from GamingOnLinux.com.
Tags: Action, Steam, Strategy | Apps: Worms W.M.D
6 Likes, Who?
We do often include affiliate links to earn us some pennies. We are currently affiliated with GOG, Humble Store and Paradox Interactive. See more here.
About the author - Liam Dawe

View PC info
Speaking of which (sorry to hijack the thread, I loved worms, but I seem to have moved on since), does tomb raider support cross platform multiplayer? I can never find anyone on it.
0 Likes

View PC info
I've only played it a couple hours since to me Worms has always been about local multiplayer and I rarely get an opportunity to play video games with friends nowadays (we're more into board games), but it has this "updated Worms Armageddon" feel I was looking for and I consider it a long-term investment that we can play once in a while when the stars align.
0 Likes

View PC info
The Steam reviewers complaining about Linux problems and lack of cross-platform play is what prevented me from buying this game when it was on sale last week. It's been on my wish list and I was really close to buying it. If the Linux problems go away and we get cross-platform, I'll for sure get it!
0 Likes

Yet they fail to remember that on GOG.com there are Linux users too, and as of yet there's still no Linux version available.
0 Likes

Yet they fail to remember that on GOG.com there are Linux users too, and as of yet there's still no Linux version available.

...or is it GOG that fails to remember they wanted to sell some Linux games? Their contribution to Linux gaming is kind of... half-baked, if you ask me.