Quoting: chancho_zombiefor me Batman Arkham Knight has some freezes with dxvk. But overall, testing a few games with DXVK, framerates do increase notably.

Feel free to post comparison benchmarks here, so developers could take a look.

I'm noticing over 10 fps increment on Middle Earth Shadow of War, I normally get 60 fps on medium setting now I'm getting 70 fps or more.
0 Likes

actually no, it's a 2 fps increment, I was testing with an older version of mesa.
0 Likes

Quoting: GuestThe overlay works for me just fine. But I used the PKGBUILD from the Aur in Arch Linux.

It works with X4? Interesting. Weird that it doesn't work for me. I'm using GOG version of the game. I wonder if it somehow prevents Vulkan layers from working?
0 Likes

Quoting: GuestYou asked specifically about X4, I missed that part. Early in the morning. I tried it, but the results are the same, game starts, no overlay and than the game crashes quite fast.

Yeah, the hang is ACO related, but I was interested in why the overlay is not showing up. I.e. same thing happens with regular Mesa (except no hang). Anyway, it's really off-topic for ACO testing. I opened a Mesa bug.
0 Likes

Quoting: x_wingI was wondering, should we clear the shaders cache?

I would like to see benchmarks with an empty shader cache, since this compiler was specifically designed with low compilation latency in mind :)

changing XDG_CACHE_DIR or whatever it is called should be enough, AFAIK, if you don't want to get rid of your old cache.

Quoting: ShmerlJust tried Mesa-aco with X4: Foundations, and it works briefly, but then causes a GPU hang. I also didn't manage to make Mesa Vulkan overlay work with it for some reason. Did anyone try that?

for me Batman Arkham Knight has some freezes with dxvk. But overall, testing a few games with DXVK, framerates do increase notably.

Could those freezes be due to building up the shader chache?
0 Likes

What mesa version is this ACO shader compiler forked from. Is it 19.1.X or the unreleased 19.2?
Doing comparisons against the wrong mesa version won't mean anything.
1 Likes, Who?
x_wing 4 Jul, 2019

Quoting: sr_ls_boyWhat mesa version is this ACO shader compiler forked from. Is it 19.1.X or the unreleased 19.2?
Doing comparisons against the wrong mesa version won't mean anything.

It's 19.2, AFAIK. In order to do a useful test, you should always run tests using the same compiled libraries with llvm and without it. From my point of view, that's the only way to get a fair results to compare.
0 Likes

Anyone tested Dying Light yet? The game is working OK, but everything is predominately gray (new compiler on/off doesn't matter) with this Mesa build: 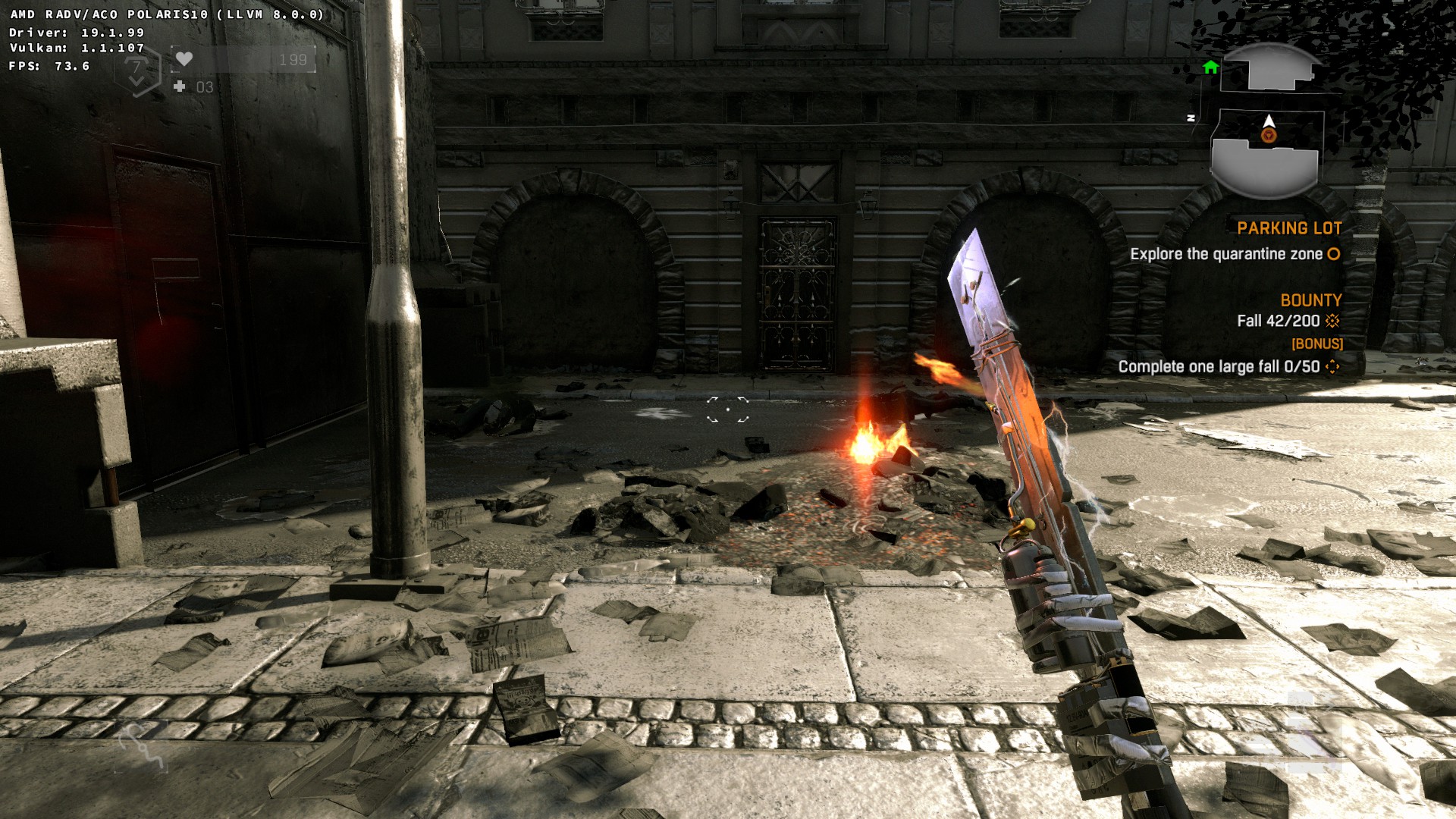 Quoting: GuestSo I tried compiling Mesa myself for the first time. Before I used the ppa referenced in the news article on GoL. I used your script @Shmerl but that did not work. I built the newest version of meson 0.51 but it kept looping endlessly on regenerating build files. Then I figured it is due to the compiler option meson --native-files and I deleted that.

Interesting. I'm still on Meson 0.49. Did newer Meson remove --native-files option? That part was needed to set correct llvm version when building, since my script supports choosing that.

Once Debian testing will get unfrozen (soon) and packages will refresh, I'll update my script if anything will be broken.

Quoting: GuestAfter that everything compiled and I tried launching vulkaninfo and games with LD_LIBRARY_PATH and VK_ICD_FILENAMES referenced to the build but all die saying bad driver.
What am I missing?

Not sure. How does the resulting ICD file look like? Does it point to the right location of .so? If not, place it where you want it, and manually edit the ICD JSON to point to the right place.
0 Likes
« 1«3/11»
While you're here, please consider supporting GamingOnLinux on: