Building a Retro Linux Gaming Computer - Part 10: For I Have Sinned

It was another shovelware collection that first introduced me to XEvil, in this case 300 Arcade Games by Cosmi Corporation made in 2000 for Microsoft Windows. This X11 classic was ported to DirectX by Micheal Judge, with the original game being first released by Steve Hardt in 1994 as a way to teach himself C++ as a sophomore. XEvil would grow in popularity from there, even being the star of organized tournaments similar to those done for Doom and Quake at the time.

The version included on 100 Great Linux Games is actually the forked 1.5.5 Mutant Strain with inferior sprite work, worse controls, and choppier performance than the final stable 2.02 release. A controversial opinion in some quarters as the comments section of The Linux Game Tome illustrates, with people bemoaning the loss of the green chopper boys and black aliens, with some even pining for a return to the original black and white graphics.

That final version of XEvil has near feature parity between the Linux and Windows releases, with one glaring omission. The interfaces are a little different but accomplish the same thing, with the Linux version having more graphics options but the Windows version supporting full screen. On Linux smooth scrolling is disabled by default and needs to be toggled due to the performance penalty, but it gave me no problems running on my Pentium III 500 Katmai.

No, the biggest issue is the Linux version does not have any sound. On Windows a memorable MIDI music soundtrack plays that sounds great with my Sound Blaster 16 card, and the sound effects are as much a part of my childhood as the whole rest of the game. XEvil plays the same no matter the platform, but for a game that started out on UNIX it is disappointing that Windows users once again ended up having the better time.

At heart XEvil is a basic deathmatch, but it is the anarchic elements that keep it entertaining. You can end up transmogrified into a frog gifted with built-in lasers, or have the dog whistle spawn facehuggers instead, breeding aliens that fight for you. By playing with the wide assortment of creative weapons, items, scenarios, and classes on offer, anything that can happen will happen. One minute you can be down, the next you can be right back up again. 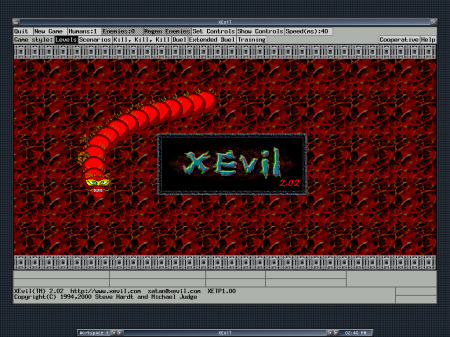 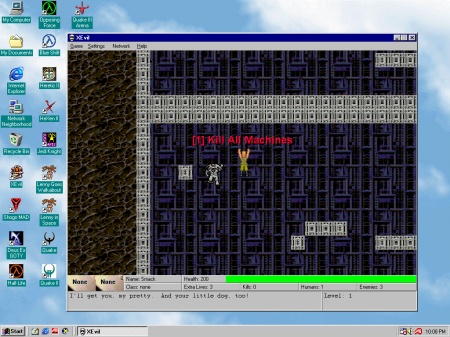 All of this was well documented on the XEvil website, including detailed character backgrounds providing some backstory on how everyone got sent to Hell. Familiarizing yourself with these is important, as a large part of the game is learning the strengths and weaknesses of the various character classes, and swapping between them as necessary. They are all fighting for their rank in Hell, with the best positions available to those who kill the most.

With a premise like that the game is edgy to the point of unreasonable, but it is done with enough tongue in cheek to keep it from being offensive for the most part. If it were rated by the ESRB it would have warnings for violence, animated blood, suggestive themes, use of drugs, mature humour, and strong language. That being said, one of the scenarios tasks you with saving baby seals, so you can not get too upset with it. Until it tasks you with the inverse.

Sadly the creator made a real deal with the devil to keep the website online in 2017, preserving just a shell with hosting paid for by an awkward segue promoting online casinos. It need not be like this. XEvil is free software released under the terms of the GNU General Public License. The burden of the game's future does not need to rest in the creator's now jaded hands. Another with the talent could revive XEvil and bring all of its features back home again.

I am not sure which would be easier, adding a sound layer to the original X Windows version or instead porting the DirectX release over to SDL, but XEvil is worth remembering. It still runs fine on current Linux distributions, and an adaptation for modern compilers and 64 bit machines was posted on GitHub with the version number 2.1 Beta 1. There is no reason XEvil has to die a death, other than its modern obscurity.

Having now explored a whole host of other sidetracks, I think it is about time I went back to the original stated goal I had when first building the computer, and play another title from Loki Software. This time I intend to take full advantage of possessing legacy hardware to play a game that not only does not have a modern source port, it is not even available for sale digitally at time of writing. Even if this particular apple does not fall that far from the tree.

Carrying on in Part 11: Forgotten Heresies

Hamish Paul Wilson is a free software developer, game critic, amateur writer, and farm labourer living in rural Alberta, Canada. He is an advocate of both DRM free Linux gaming and the free software movement alongside his other causes, and more information on him can be found at his icculus.org homepage where he lists everything he is currently involved in: http://icculus.org/~hamish
See more from me
Some you may have missed, popular articles from the last month:
13 comments
Page: 1/2»

The Linux Game Tome entry for XEvil has been archived here:
https://web.archive.org/web/20071010005312/http://www.happypenguin.org/show?XEvil

The GitHub repository can be found here:
https://github.com/lvella/xevil

And the final XEvil 2.02 release can be downloaded from here:
https://icculus.org/~hamish/dianoga/xevil-2.02.tar
8 Likes, Who?

My favorite version was 1.4.

For me, the ideal experience was 2 player on the same machine. 2 windows.

I still recall how difficult was the Fire Demon.
Once I swapped with him.
The hud said he had 2000 life points and his weapon is fireball.

I wish I could see this version again, ported to SDL, so I could play it on Wayland.

PS. Nice to read you again Hamish Wilson.
2 Likes, Who?

View PC info
Judging by the article name, I thought it was going to be about the first-person shooter SiN. :P
1 Likes, Who?

Quoting: CalinouJudging by the article name, I thought it was going to be about the first-person shooter SiN. :P

Yeah, sadly the Hyperion Entertainment ports are next to impossible to find on disc these days. I did mention that I played the SiN demo on Red Hat Linux 9 earlier if you would recall.

Ha! The tradition lives on.
0 Likes

Quoting: CalinouJudging by the article name, I thought it was going to be about the first-person shooter SiN. :P

Yeah, sadly the Hyperion Entertainment ports are next to impossible to find on disc these days. I did mention that I played the SiN demo on Red Hat Linux 9 earlier if you would recall.

I thought the Linux version was just a patch.
Time flies. :)

Quoting: HamishYeah, sadly the Hyperion Entertainment ports are next to impossible to find on disc these days

Indeed... I think I got mine through Linux Game Publishing, before they folded.
1 Likes, Who?

Quoting: HamishYeah, sadly the Hyperion Entertainment ports are next to impossible to find on disc these days

Indeed... I think I got mine through Linux Game Publishing, before they folded.

Tux Games is probably what you are thinking of, although it was run by the same people as Linux Game Publishing.

I really regret not being able to buy a few boxes from them before they closed shop.
1 Likes, Who?

I didn't know this game, but it has a rich history.

I have to check it out.

I still have all three games created by Hyperion Entertainment, and two of them I registered on their website. Gorky 17 is a DRM-free game without a key. Shogo was published in a box for the Mac version, which is so weird.

Sadly, they never created any patches for Sin and Shogo. Sin and Gorky 17 also were ported to Linux PowerPC by Hyperion Entertainment.

Sin was almost as good as Soldier of Fortune, but with worse graphics and less addictive. However. it was fun to play it on Linux, and I remember that even liflg.org created a new installer for a Linux version.

View PC info
Just discovered that the MobyGames page for XEvil has a lot of nice Linux screenshots:
https://www.mobygames.com/game/xevil

As does The Ace of Penguins thanks to the same contributor:
https://www.mobygames.com/game/ace-of-penguins

Nice to know that I am not alone in doing all this.