Thanks to Mike for sending this in, it seems Man O' War: Corsair - Warhammer Naval Battles [Official Site] will gain a Linux version in future.

Mike asked them on twitter about it and got a nice reply:

@mikeonlinux that is the plan ;)

Looks like they changed their tune since April when they said no. 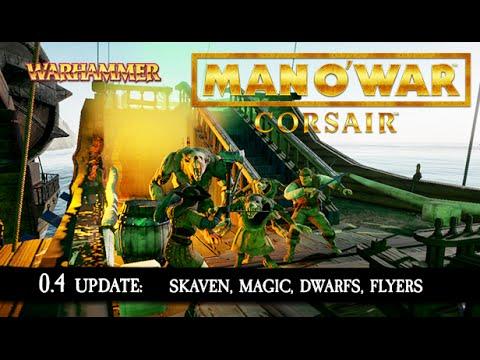 I must admit I hadn't heard about this one, but it looks like it could be pretty damn fun!

Sail the seas plundering enemy ships, visiting ports, and trading. Dominate everything in your path with a fleet of ships at your back and watch people flee at the mere sight of you, leaving legends of your deeds in the history books and steel through the hearts of your enemies.

Article taken from GamingOnLinux.com.
Tags: Early Access, Action, Adventure, GOG, Steam, Unity
0 Likes
We do often include affiliate links to earn us some pennies. We are currently affiliated with GOG, Humble Store and Paradox Interactive. See more here.
About the author - Liam Dawe

View PC info
looks good.. the question is... when?
0 Likes

View PC info
This is a good question indeed. Happy to help whenever possible ;)
0 Likes
chepati 22 Sep, 2016
View PC info
In my humble opinion, Assassin's Creed 4 Black Flag should be the yardstick against which all future pirating/sailing games should be measured. It's got terrific sailing mechanics, intuitive naval warfare, amazing boarding, and the graphics are still very good. It's realistic enough, yet not too realistic to the point of sailing becoming a tedious exercise of matching wind direction. And it has no fantasy/monster elements.

It irks me a lot when three years later there is still not a single game that comes close to AC4BF in terms of visual quality, good immersive story, and just plain fun sailing. I understand it takes a big studio and lots of money to make a game of that caliber, but with newer graphics engines, visuals should not be an issue. All you need is a good writer (or a team actually) to pen a good story. Voice acting is, I imagine, the costliest aspect for a small studio to achieve.

I really wanted to like this Manowar game, but come on, it's 3 years since the release of AC4BF and I feel Manowar is a huge regression from AC4BF.
0 Likes

View PC info
It's been some months. I wonder if the plan to port to Linux is still in the cards? I will try and ask.
0 Likes
While you're here, please consider supporting GamingOnLinux on: