Greedy Guns is a fast paced action platformer with exploration, ability upgrades and loads of bullets. It's available in a free and open beta on Itch.io.

The game is inspired by classic shooters like Metal Slug and Contra, but the developers of Tio Atum have added their own unique flavor to the formula by adding exploration and ability upgrades typical of the metroidvania genre. 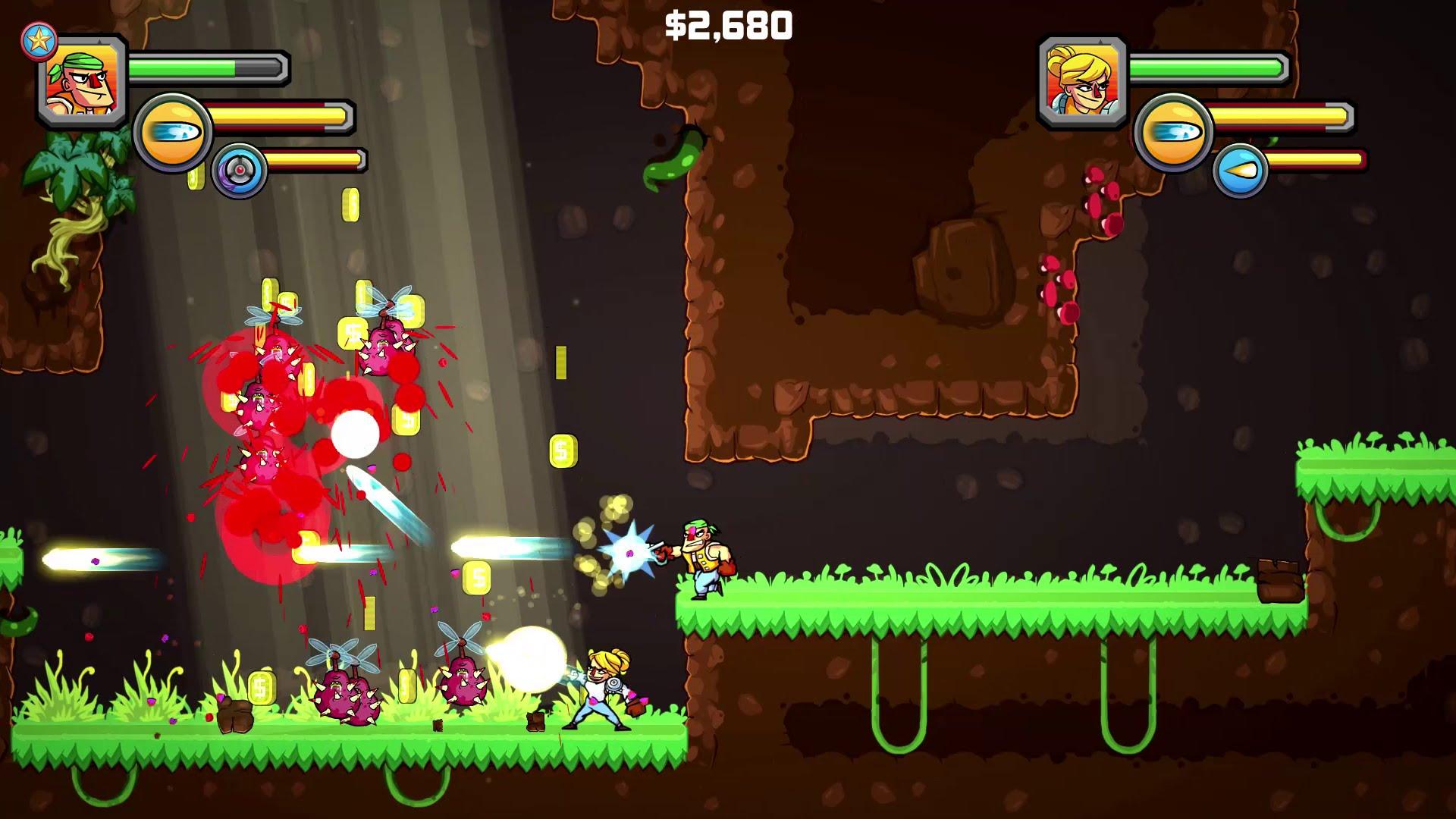 YouTube videos require cookies, you must accept their cookies to view. View cookie preferences.
Accept Cookies & Show   Direct Link
As can be seen in the beta trailer above, the game has a co-op mode. I haven't had a chance to try it myself, but there are options in the menu for local co-op, with either both players on gamepads or one on keyboard and mouse. I've tried single player with both control options, and I slightly prefer keyboard and mouse for the precision it gives when aiming. Gamepad also works well, but since you only have an 8 directional aim, you often have to move into place to effectively hit your target.

I played with my wired Xbox 360 controller, and I liked the default control options. You have movement on the left side, with the left stick for direction and the left trigger for jumps. On the other side of the controller, you aim with the right stick and fire with the right trigger. When you acquire a second weapon, you can switch between weapons by pressing the right bumper button.

You can open a map at all times by pressing the Start button on your controller, or Escape with keyboard controls. This is a nice touch, but at the point I have gotten so far in the beta, there haven't been a whole lot of different paths to choose between. I did acquire a skill that will let me pass through an obstacle I noticed earlier in the game though, and I have noticed other spots where I've wondered if I might have been able to take a different path with certain other abilities typical of these kinds of games.

Just before I ended my session with the game, I fought a boss called Mother Roll, who took me at least a dozen tries to get past. That's where I learned that your guns can actually overheat and need to cool down, and just firing wildly certainly wasn't the best strategy. To get the better of her, I had to strategically use two different kinds of weapons and anticipate the behavior of a lesser enemy I had encountered previously. My agility was also put to the test in avoiding flames the boss spews at you, so the boss serves as a nice way to hone the skills you're supposed to have learnt at that point in the game.

If you think this game sounds interesting and want to help the developer make the Linux build is as solid as possible, you can get the beta from Itch.io. There's a contact email on the page that you can use to report bugs and send the developer feedback.

Greedy Guns is a Metroidvania shooter with plenty to kill and explore. Got platforming and shooting skills? Good, you are going to need them!

Inspired by the shooters of old like Gunstar Heroes, Metal Slug and Contra, Greedy Guns adds to it exploration elements and upgradable abilities.

Can a ubiquitous corporation ever be evil? Of course not, profit is beyond ethics! That’s why HOLO CORP isn’t shy of sending mercenaries to explore and preventively attack alien worlds. In return they get artifacts and DNA that they can use for much needed research. The Greedy Guns team is happy to work for HOLO CORP as long as they pay well. And do they ever. Too bad they also sell them their guns. Article taken from GamingOnLinux.com.
Tags: Action, Beta, Itch.io, Platformer
0 Likes
We do often include affiliate links to earn us some pennies. We are currently affiliated with GOG and Humble Store. See more here.
About the author - flesk

I run the Hidden Linux Gems group on Steam, where we highlight good indie games for Linux that we feel deserve more attention.
See more from me
Some you may have missed, popular articles from the last month:
The comments on this article are closed.
6 comments
Brian [Linux] 21 May, 2015
View PC info
Looks like a fun co-op game. Definitely can see the influence from Metal Slug and Contra.
1 Likes, Who?

View PC info
looks like something for me, i'll try it later today
0 Likes

View PC info
>Looks like a fun co-op game. Definitely can see the influence from Metal Slug and Contra.

M@GOid 21 May, 2015
View PC info
It have some bugs. The map don't follow you correctly so you really can't use it for directions. The joypad support is hardwired for the 360. Mine Xbox One joypad didn't get recognized at all.

I not a fan of the button layout. Too bad it can't be changed, but I can live with it, is the same used in Bleed.

The engine is Unity, but it work in my Trinity (laptop) A4 APU at 60fps, so the performance is ok in this one. The broken joypad support have a reason...
0 Likes

Quoting: MGOidIt have some bugs. The map don't follow you correctly so you really can't use it for directions.

Do you mean that the marker indicating your player character doesn't update correctly? I didn't experience that issue, but I did get a freeze a short while after the mentioned boss fight.

If you haven't already, make sure you notify the developer of the issues you're experiencing.
0 Likes

View PC info
Finally found the rest to try this one - very nice done indeed!
And no glitches either, despite my really old computer (Core2 Duo/9600M). Looking forward to the final version.
0 Likes
While you're here, please consider supporting GamingOnLinux on: