According to TorrentFreak, Serious Sam's Bogus Detour [Steam] is being pirated by Voksi, one of the people known for cracking Denuvo.

In this article, Torrent freak describes how the pirate Voksi is a fan of the Serious Sam Franchise and was actually a beta tester of Serious Sam, as well as being listed in the credits for that reason. 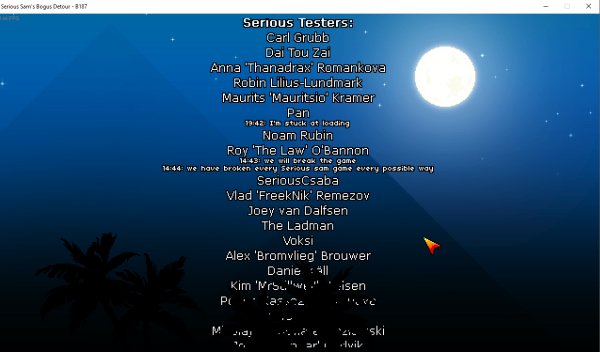 The game was released in June which included day-1 Linux support. Despite positive reviews and a "Very Positive" user rating on steam, 6 months later, the game didn't even cover development costs, let alone make a profit. It was a flop!

Voksi contacted the developers and they agreed to have him pirate the game for marketing purposes. They created a special build that's fully playable, even with network play. The special build is slightly less polished and always displays a message at the bottom of the screen saying,

We are small indie studio. If you liked the game, please consider buying it. Thank you and enjoy the game!

While the special build is for Windows, these developers are unconventional in their methods. They support Linux which unfortunately is also unconventional in the gaming industry. Serious Sam's Bogus detour has been mentioned here a few times before on GOL. (Note: It is available on GOG as well, but not the Linux version)

We do often include affiliate links to earn us some pennies. We are currently affiliated with GOG and Humble Store. See more here.
Some you may have missed, popular articles from the last month:
The comments on this article are closed.
20 comments
Page: 1/2»

View PC info
Bought the game long time ago and loved it. It's sad it did not get more attention from gamers.
1 Likes, Who?

Since Steam Linux version and Steam being good with refunds I never pirated a game anymore, I just wish devs and publishers put a demo for we to try out, I must say most games I won't even buy to test because I think it will not run or not being good enough for the hassle. I have all Serious Sam games on Fusion but never tried this one, I guess the marketing worked for me I will try out :D
0 Likes

Quote... being pirated with permission from the developer

Never would have known about this game were it not for the piracy news. Buying it! Looks fun.
1 Likes, Who?
Swiftpaw 14 Mar, 2018

View PC info
Windows only? Aww, it's always good having DRM-free versions around, so it's too bad it didn't release for us as well.
1 Likes, Who?

Maweki 14 Mar, 2018
View PC info
The description on the steam page is seriously lacking. They don't mention Couch-Co-Op but it has the badge on the right side. How many people can couch-co-op? Twelve? Four? Two?
0 Likes

View PC info
It is a great game and I bought it upon release, but I support these efforts by the devs and Voksi. Shame it didn't sell well :-(
0 Likes

Quoting: Wendigo"When I was young"™ this was called "Freeware".

More like Shareware really, with it being a less polished version with a beg screen to buy the full game.
0 Likes
1/2»
While you're here, please consider supporting GamingOnLinux on: