Liberapay or Buy us a Coffee. You can also buy games using our partner links for GOG and Humble Store.
Hollow Knight
Page: 1/4»

This one flew under the radar for me, despite how popular it has become. Recently read a bit about it, and wondered if it could be up my alley. I loved Super Mario back in the day after all, both on NES and Gameboy (the one with only grey-ish colours! :D). When GOG put it on sale again ("only" 50%, but no matter), I decided to buy it.

Played it some hours yesterday, and it's been fun so far. Everybody keep saying that the first hours aren't the best, so I expect it will get better once the game opens up more. I'm not very good with games that require super-fast reflexes and the like any more, and the first boss has so far killed me probably 10 times, but I'll keep trying. Maybe he'll miss jumping on top of me at some point, or I'll be able to heal in between.

Confusing start and I've been going this way and that, not finding my way back to where I was (then dying again later somewhere else), but have purchased a compass now, which makes the map work rather a lot better. Before I died several times when I almost had enough money (geo).

And best of all (well, it's good, haha), it's a native Linux game, and available DRM free (on GOG). No need for any acrobatics. Just install and play.

Have any of you tried it, and what have been your experience with it? (without spoilers of course).

It doesn't appear to be well-covered here, which surprised me a bit. I can see a review from 2017, and then an article recently about the sequel (which doesn't have a date yet, I think).
0 Likes

I seem to remember there were articles about every single free dlc here as well, so there was quite a bit of coverage ;-)
Quite a gem this one, for sure!
0 Likes

It is a very good game, you will enjoy it!
0 Likes

I feel kinda stupid here now. Can't find out how to progress, and it's still in the beginning :(

Spoiler, click me
Have beaten the False Knight, which took probably 10+ tries, haha. Found a small area that I can't really go into because it's pitch dark. Some locked doors. I saved up enough geo to buy a small key, thinking the door to the right would make me progress. But there was just a priest that told me I had no regrets.

Found an area called Greenpath, but I can't really do much there either. Go around and kill some foes, but maybe I can't get to the proper areas there, because I'm not able to jump far enough. Can't buy a map for the area either (I've tried many times, but no go despite there being notes about being able to do so littered around). Where am I supposed to go?

This is what my map looks like for now 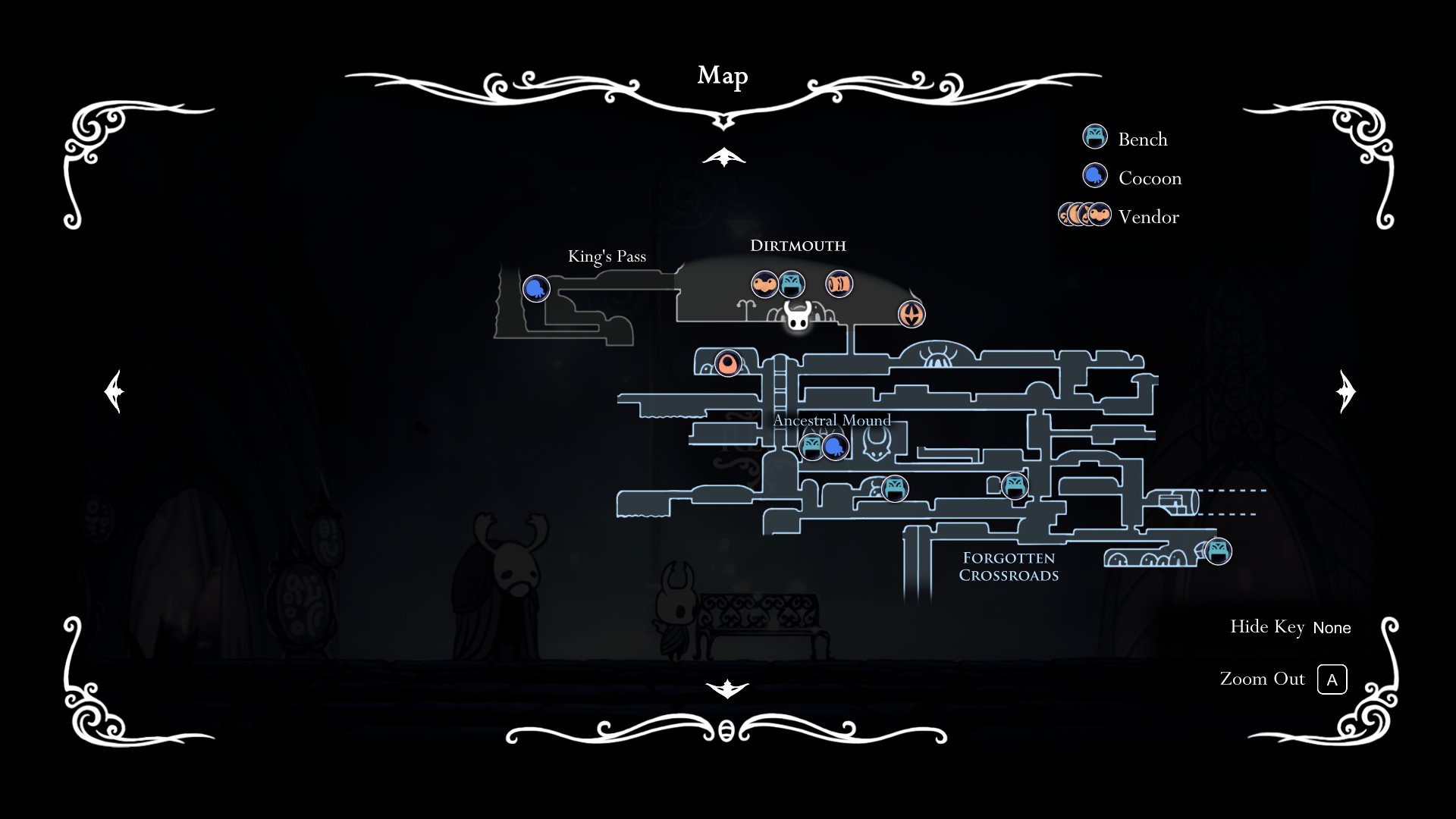 Yeah, honestly the beginning area is the most confusing. It took me an embarrassing number of tries to pass most bosses. Even once I figured it thier attack patterns, it was still awfully hard.

Great game. Totally worth it.
1 Likes, Who?

Quoting: denyasisYeah, honestly the beginning area is the most confusing. It took me an embarrassing number of tries to pass most bosses. Even once I figured it thier attack patterns, it was still awfully hard.

Great game. Totally worth it.

Rage quit earlier after dying a zillion times to a boss called Hornet. Couldn't make head nor tails out of attack patterns. When I thought I had it down, she obliterated me in about 5 seconds.

The game is excruciatingly hard. Not sure if it will prove to be up my alley, but I will try a bit more. Quite possible it will be way too hard and way too frustrating, though. No handholding of any type either, or any hints really. Suppose this was how Dark Souls was? I never played that.

Anyway, I'm not really into roguelikes, it gets too frustrating, and this is getting dangerously close to that territory. But apart from the unfairness of combat, I really like the atmosphere, the music, the platforming. So I can see why people like it, it's a good game.
0 Likes

Hornet's fights are tough. I generally found the bosses needed a lot of time and patience. If I got frustrated, I had to walk away. Almost had to be in the right state of mind to fight a boss.

It's super fun, but I'm not sure if I'd play it again now that I've beaten it. I'm still traumatized by the crystal level, lol. Definitely will buy the sequel. No questions about that.

Managed to beat her in the end, but it was rough. Patience is key, but not always enough. Sometimes they simply wipe you seemingly no matter what you do. A jump at the wrong time, trying to heal going wrong, etc.

However, one thing that I'm finding really annoying, is the dearth of benches/checkpoints. Does this not get better? It's really frustrating to die and then needing to go 10-15 screens back, through a bunch of enemies and tough platform challenges, going past spikes and whatnot, and then dying again, or on the way there (losing all money).

And what's worse, I ran into a boss fight (or mini-boss), where I naturally die a lot, and the shade is INSIDE the room. Which means it's impossible to get the shade back, and then back out. It was in the City of Tears. Does this happen many times too? Just seems like a big middle finger to the players :(

The lack of benches and very hard, even unfair, boss fights, makes it very frustrating to play those segments. Yesterday I gave up trying to get through a village far down through the water somewhere, and had to backtrack for at least 30 minutes, maybe an hour.

Exploring is fun, though, and I'm enjoying the game, at least as long as I don't accidentally run into bosses or mini-bosses. Those are crazy hard. One guy covered the entire screen in lava or something, impossible to escape, and jumped all over the place. Thankfully it was possible to get back the shade there, although it was very tricky to get back out through some spikes up and down the walls. It's what ultimately did me in in that village with all the flying serpents. Kept dying on some blasted spikes it looks like I have to traverse. Would be great with a "Beam me home" button :D

It is tempting to look up guides or wikis, but I am worried about getting spoilered. If others are playing this game, or remember details, can you help me out? I'm struggling with what to do now, having played some 30 hours, beating a few bosses, but running into dead ends or "impossible" fights.

Spoiler, click me
I have upgraded the Nail twice (last with a Pale Ore), have defeated some bosses: False Knight, Hornet and Crystal Guardian (if that was a boss). Thought I faced a boss in the Soul Sanctum, but apparently that was "only" a soul warrior, a mini-boss of sorts. I get completely wiped there in seconds, and the shade is left in the room, which makes it much harder, having to fight two enemies. The whole room is basically nuked. Tried to take on the Mantis lords, but get nuked in seconds there too. Presumably have to fight all three, but I can barely get a hit in on the first one before dying. And travelling there... holy shit. It's like 10 screens away, through many tough enemies. I gave up on that one, and the soul area.

Have the Dream Nail (500+ essence now), the dash and wall climb ability. Apart from these impossible bosses, I can't get anywhere else it seems. In Fog Canyon a stream of what looks like oil is blocking me off from the cartographer (jellyfish area), and it's the same somewhere on the other side of the land. There are some shaking floors that I can't get through here and there. Have found the Royal Waterways and done what I can there (I think), including getting a map. Have 7 health skulls and extra soul capability, but only have 4 notches for charms. I use the compass (so I know where the hell I am), the gathering swarm (other 1-notches seem less useful), and the charm that increases soul collecting.

There is a switch in Mantis Village I can't get to, but I couldn't figure out a path I hadn't taken, everything seems to be cleared, except that when I change screen at some point down there, I see another mantis dude behind a locked door.

Tried to get aaaaaall the way east in Crystal Peak, but looks like I need to fly to get across the wide floor there. There is a grub behind (probably) the shaky floor, but otherwise think I've cleared it now.

Have taken on 3 (iirc) grave stones, and after some struggles defeated them. Presumably I can take on a whole pack of those guys east of the essence lady too. Accidentally 'farmed' a woman called Joni, so hope she isn't important. Noticed the "Listen" text when the Dream Nail animation was running (and no reloading in this game).

Where to go from here or what to do? Currently stuck in soul sanctum, but it seems so impossible. Lost 1400-ish geo earlier, so when I went back this time I deposited what gold I had with the bank.
If somebody read all that, are you able to tell if I've missed something obvious somewhere that could enable me to move on, without taking on those two "impossible" bosses? I got tired of dying within seconds after travelling for 10 minutes each time 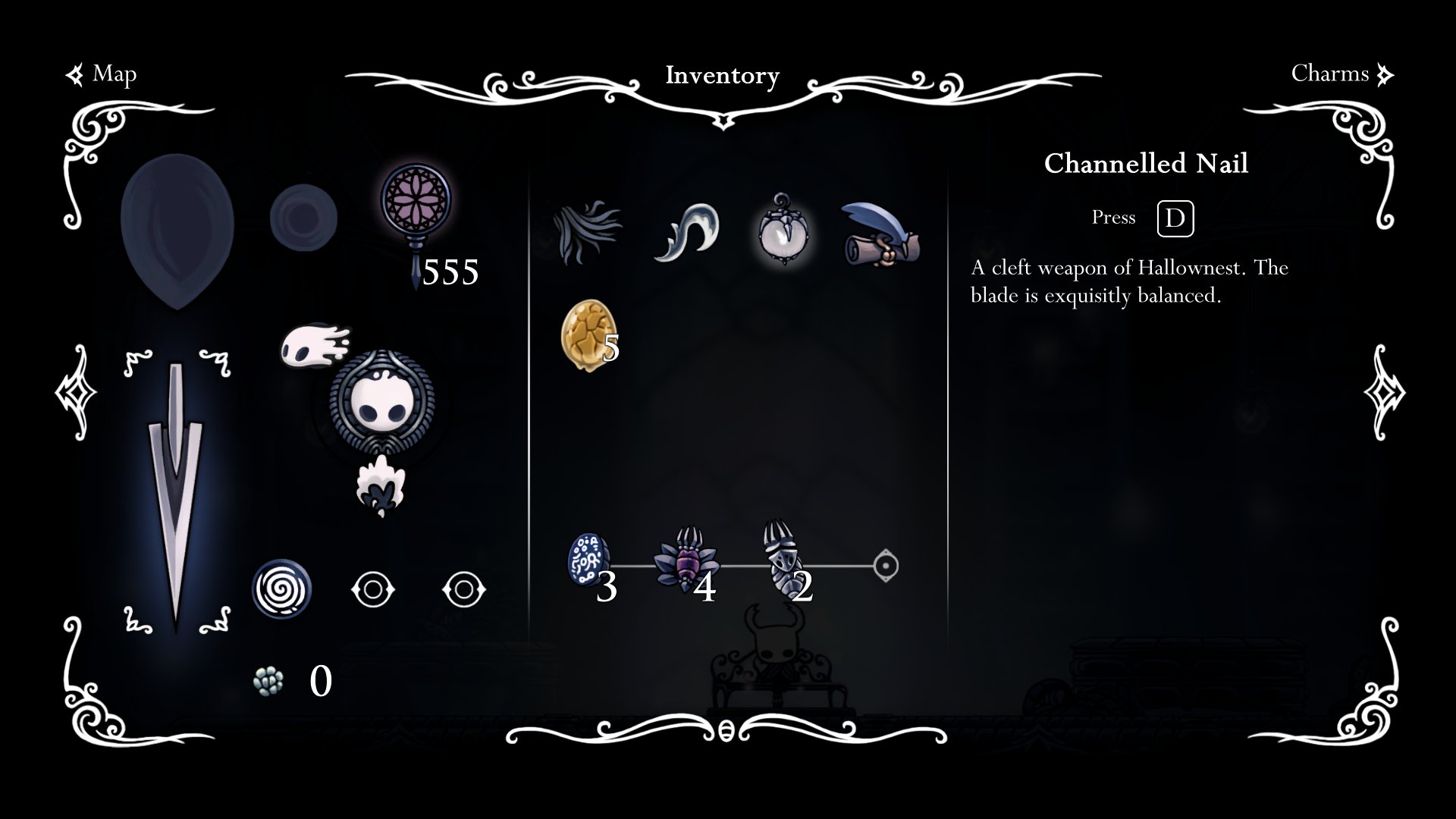 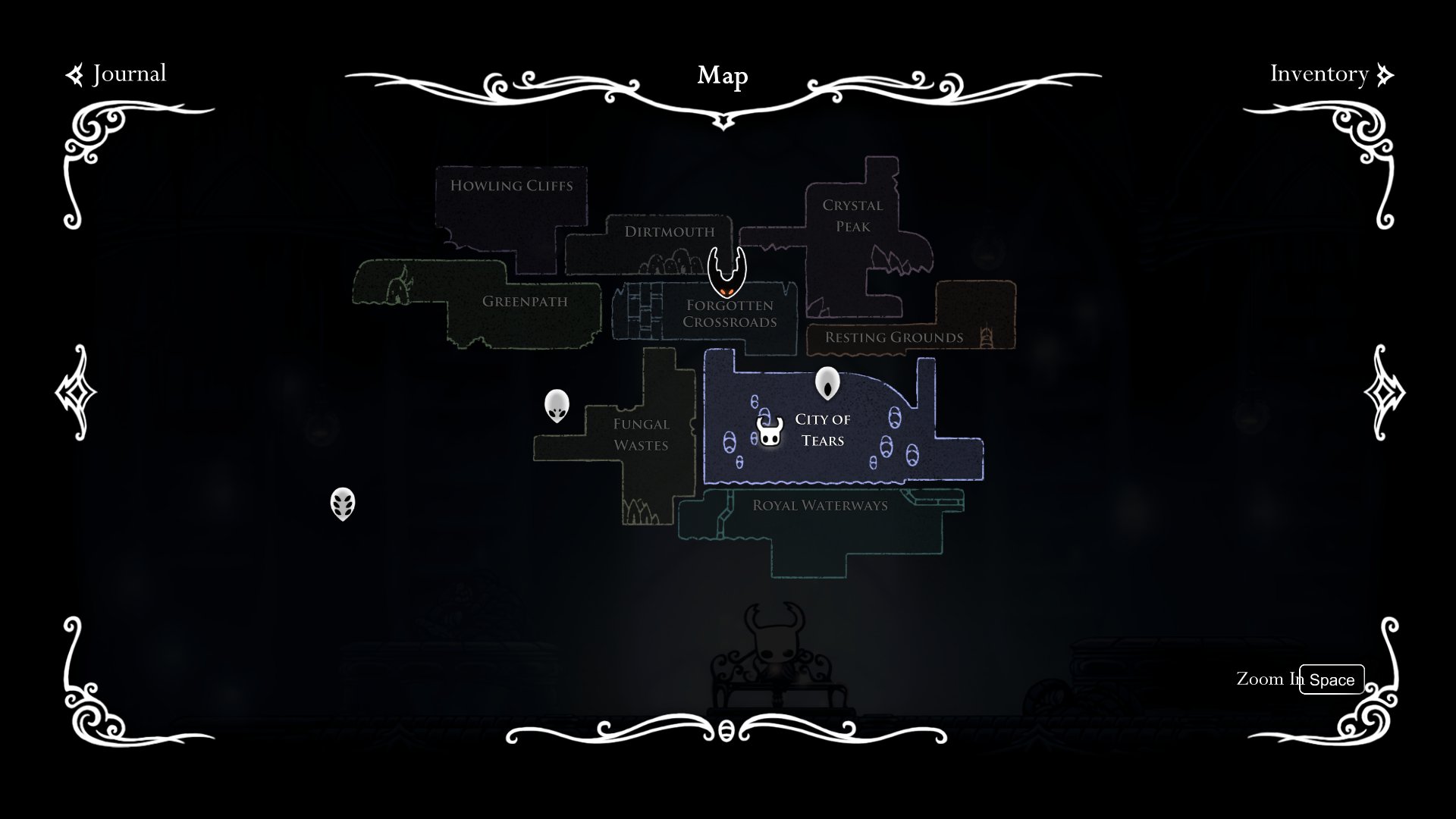 (Took on the more impossible soul twat this time, behind that once-locked door, so that is where my corpse currently resides) 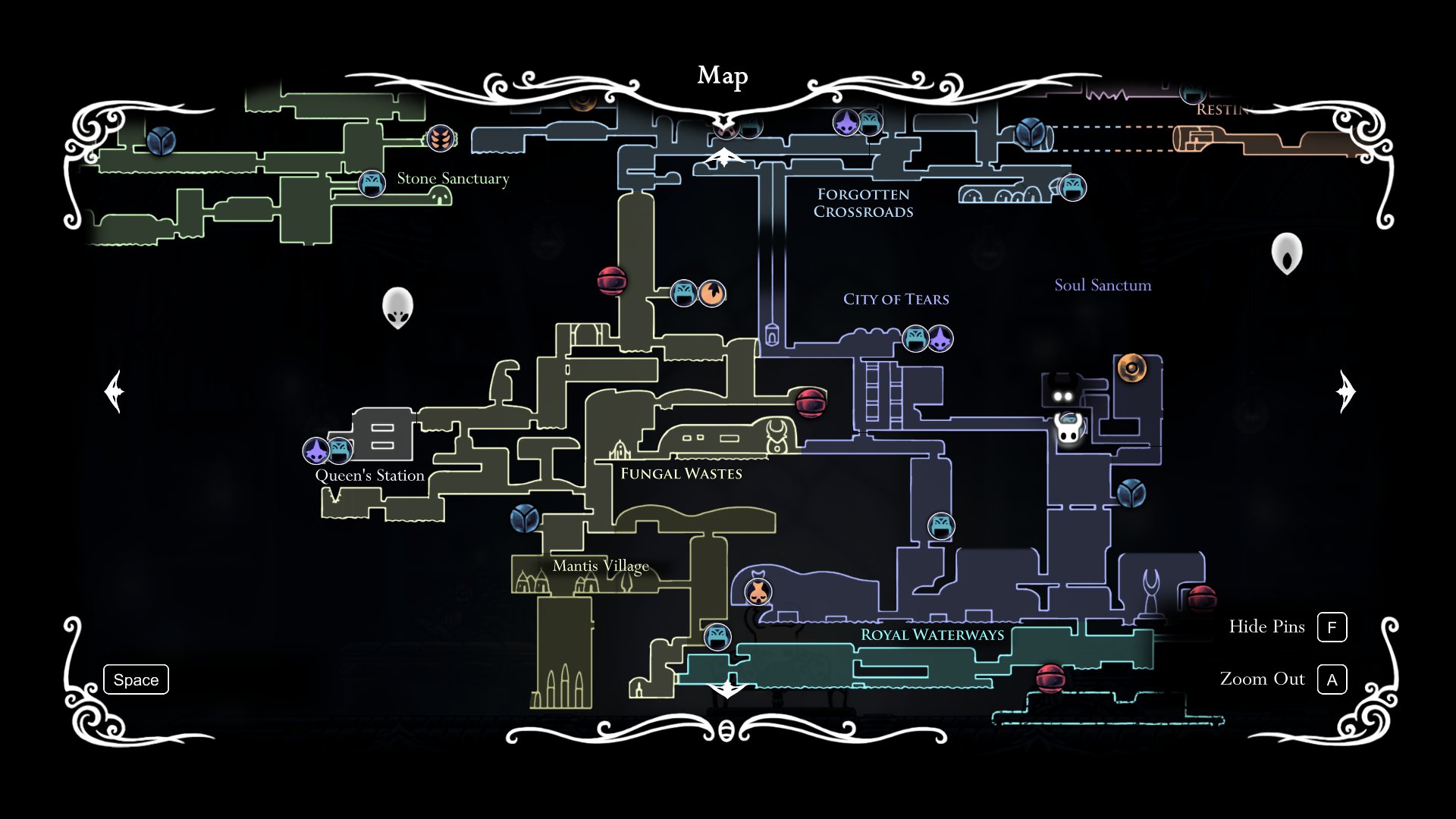 Crystal Peak and get the Crystal Heart and City of Tears or rather Soul Sanctum defeat "mini boss" go further defeat Soul Master get new ability.
1 Likes, Who?
1/4»
While you're here, please consider supporting GamingOnLinux on: